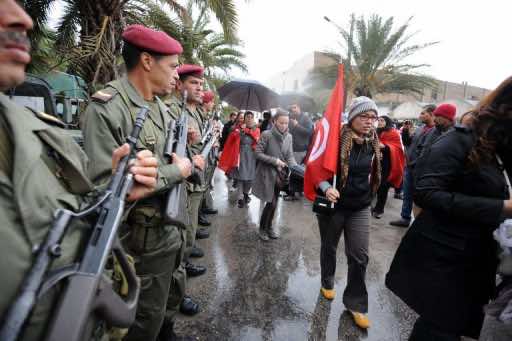 Tunisia’s ruling Islamists on Thursday downplayed the threat from Muslim militants, saying it was worse under the Ben Ali regime, as explosives were seized from a Libyan boat and the army pursues jihadists on the Algerian border.

“What happened in Soliman and Rouhia was worse than what is currently happening in Mont Chaambi, even if it is a massive crime,” Rached Ghannouchi, leader of the Ennahda party that heads the ruling coalition, told reporters.

Soliman is a town near Tunis where clashes in 2007 between the army and Islamists killed a soldier, two policeman and more than 10 Islamists.

The ministry give no details about the quantity of explosives seized.

But an investigator told AFP that the equivalent of 150 kilos of TNT (330 pounds) were found on a Libyan boat in the port of El-Ketef, near the southern town of Ben Guerdane and several kilometres (miles) from the border.

The source said two Tunisians and the Libyan boat owner had been arrested.

On Thursday Algerian Interior Minister Dahou Ould Kablia told parliament that security had been reinforced at the border with Tunisia to confront “any suspicious activity in the region.”

“There is coordination concerning the exchange of information but Algeria does not interfere in the affairs of Tunisia,” he added.

Ghannouchi said there was “no justification” for Islamist violence in Tunisia and insisted that terrorism would fail because Tunisians were moderate Muslims.

“There is no justification for violence in Tunisia, there is no place for jihad, except the jihad that promotes development and spreads goodwill,” said the veteran leader of the ruling Islamist party.

“In Tunisia, terrorism cannot succeed because it is a moderate Muslim country. Fanaticism is an exception.”

Ghannouchi sharply criticised the press coverage of the search operation that began last week, in which homemade bombs planted by the Islamists have wounded 16 members of the security forces, some of them seriously.

“The newspapers and certain people are saying that Tunisia is heading towards civil war. Terrorism in Tunisia cannot transform itself into civil war. That (claim) is an exaggeration and not objective.”

The search operation continued on Thursday morning for the jihadist group in Mount Chaambi, a journalist in the region reported.

Several Tunisian newspapers on Thursday blamed the government for failing to clamp down on hardline Salafist groups, which have proliferated since the uprising that toppled Ben Ali in January 2011.

Those groups have been blamed for a wave of violence, notably an attack on the US embassy last September and the assassination of a leftist opposition leader in February, cases which Ennahda has sought to portray as isolated incidents.

Le Presse warned that the country was now “at war with international terrorism,” while Le Temps raised fears of “a spiral of deadly violence similar to the one that ravaged Algeria” during its civil war in the 1990s.