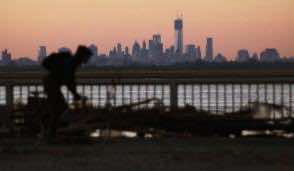 A Tunisian man was charged Thursday in New York with attempting to defraud immigration authorities so that he could build a terrorism network in the United States.

Ahmed Abassi is accused of having come from Canada, where he was previously living, to New York City and attempting to prepare his alleged militant plot.

He was arrested April 22, but the indictment — which charges him with fraudulently seeking a work visa in order to remain on US soil and “facilitate international terrorism” — was unsealed only Thursday.

Abassi came to the United States in March and met in New York with Chiheb Esseghaier, who was recently arrested on terrorism charges in Canada, the federal prosecutor’s office for Manhattan said.

In discussions with Esseghaier and an undercover FBI officer, Abassi allegedly expressed “his desire to engage in terrorist acts against targets in the United States and other countries, and his intention to provide support and funding to organizations engaged in terrorist activity.”

He also allegedly said he wanted “to recruit other individuals for terrorist plots.”

Abassi then allegedly accepted an offer from the undercover officer to falsify his visa application and get permission to stay in the United States, purportedly to work for the officer’s US-based company.

“In reality, Abassi made clear that he wanted to obtain immigration documents and to remain in the United States so that he could engage in ‘projects’ relating to future terrorist activities, including recruitment,” the prosecutor’s office said.

“Abassi had an evil purpose for seeking to remain in the United States,” US Attorney Preet Bharara said.