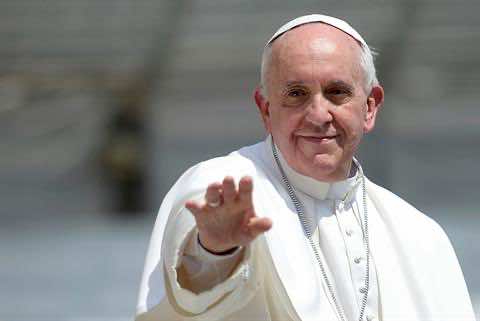 Pope Francis on Friday prayed for “full unity” with the Coptic Orthodox Church as he received Patriarch of Alexandria Tawadros II for an historic visit in the latest sign of closer ties between the Catholic and Orthodox worlds.

“Our persevering prayer, our dialogue and the will to build communion day by day in mutual love will allow us to take important further steps towards full unity,” Francis told Coptic Orthodox leader Tawadros at their meeting in the Vatican.

“We long for the day when, in fulfilment of the Lord’s desire, we will be able to communicate from the one chalice,” he said, acknowledging that there had been “centuries of mutual distrust” between their two Christian churches.

This was the first such meeting in 40 years.

Tawadros’ predecessor Shenouda III visited the Vatican in 1973 to meet pope Paul VI and the two had launched a process of dialogue between Catholics and Copts and pope John Paul II also visited Shenouda in Egypt in 2000.

Francis spoke of “an ecumenism of suffering”.

“Just as the blood of the martyrs was a seed of strength and fertility for the Church, so too the sharing of daily sufferings can become an effective instrument of unity,” he said.

“And this also applies, in a certain sense, to the broader context of society and relations between Christians and non-Christians: from shared suffering can blossom forth forgiveness and reconciliation, with God’s help,” he added.

The four-day visit was the high-point of a tour of Europe by Tawadros, who was elected in November 2012 as leader of a Christian Church faced with the rise of radical Islam and growing emigration.

Copts account for up to 10 percent of the population in Egypt, where tensions and clashes with the majority Muslim population have increased since the fall of Hosni Mubarak’s regime in 2011.

Copts have been critical of President Mohamed Morsi’s leadership and of a new constitution seen as favourable to Islamists. Clashes between Copts and Muslims have left dozens dead in Egypt.

The spiritual leader of the world’s 250 million Orthodox Christians, the Ecumenical Patriarch Batholomew I, attended the pope’s inauguration in March in an important gesture of rapprochement.