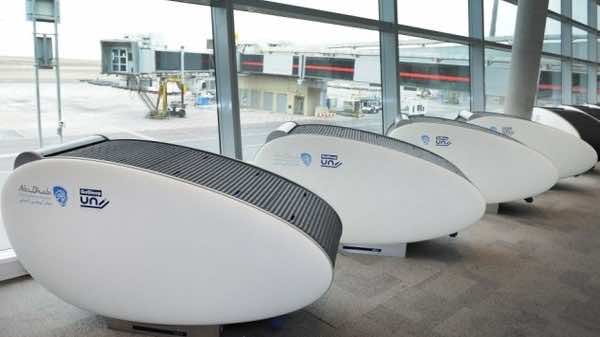 Suffering from jet lag or just need a quick nap before you catch your next flight? Abu Dhabi International Airport launched the world’s first ‘GoSleep’ pod for travelers.

For $12.25 an hour, travelers get the chance to kick back and relax at the airport’s departure lounge and enjoy some shut-eye within a futuristic looking chair, which lays back into a bed. The traveler can even be sheltered off from the airport bustle.

The ‘GoSleep’ pod allows customers to comfortably enjoy a nap while being entirely cosseted inside the shell.

“We’ve tested them before and the feedback was very good,” an airport representative told CNN.

“We’ll be collecting more feedback this week since we only began operating them today.”

The airport will look to add funkier features to the pod as time goes on, bringing the comfortable shell-like device into the 21st century. Features such as access to the Internet and outlets for charging your smartphone will be made available.