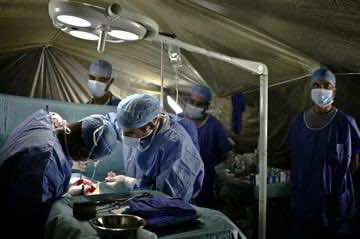 According to the news agency AP, only one overworked Moroccan doctor performs caesarean sections for women to deliver their babies in Jordan’s Zaatari refugee camp.

The news agency said, “The Moroccan hospital, run by the North African country’s military, is the only facility in the camp that performs C-sections. It has delivered 196 babies — 153 of them C-sections, sometimes up to five a day.”

“The facility has 47 specialists but only one gynecologist, who performs all the cesareans, and only one anesthesiologist,” AP added. “There are 10 to 13 births taking place every day in the Zaatari camp alone,” said Muna Idris, the assistant representative to Jordan for the U.N. Population Fund, known by the acronym UNFPA.

AP reported that, “all the clinics carry out regular births…Just two of the clinics — the Moroccan hospital set up in August and another run by the French agency Gynécologie Sans Frontières — have delivered nearly 600 babies, according to UNFPA’s humanitarian affairs specialist, Shible Sahbani.”

“Thank God, we have clean facilities and safe instruments in such a refugee camp,” the woman Umm Raad quoted by AP as saying this week in the maternity ward of the Moroccan field hospital, holding her hour-old baby, Abdullah.

The first Arab head of state to visit the desert compound, last October Moroccan King Mohammed VI toured a Moroccan field hospital in the Zaatari camp, which houses around 36,000 Syrian refugees. During his visit, the king gave two donations to the Syrian refugees in the camp. In addition to medical equipment and medicine, the donation included 6,000 blankets (5,000 for the elderly and 1,000 for infants and children), 7 incubators for newborns and 1,000 units of medical material for infants, according to MAP.