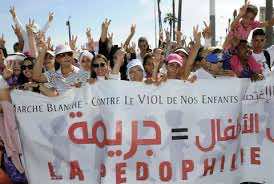 A court in Casablanca has sentenced a 60-year-old French citizen to 12 years in prison for paedophilia, Moroccan police said on Saturday, confirming a verdict announced earlier in the week.

Police originally arrested the Frenchman on charges of paedophilia, “setting up a criminal organisation” and “illegal residency” in the kingdom.

Akhbar al-Yaoum reported that he had confessed to the charges, but police sources said that the accused had appealed the verdict.

The police sources added that the French national had come to live in Morocco four years ago, fleeing the possibility of prosecution for paedophilia at home.

After ha arrived in Morocco, he started relationships with two young women he employed as domestic workers, before asking them to help him meet 10-year-old girls.

The two young women were also jailed for eight months for “complicity in forming a criminal organisation.”

Thousands of people marched in Casablanca on May 5 to protest against child sexual abuse after a harrowing assault last month in the northwestern Sidi Kacem region nearly killed a young girl.