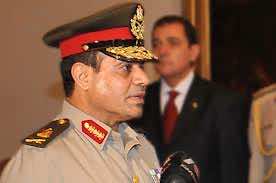 General Abdel Fatah al-Sissi, who is also defence minister, called for the country’s divided factions to adopt “a formula for an understanding,” warning the alternative could be “extremely dangerous.”

Some of Morsi’s critics have called on the army to intervene against the country’s first Islamist and civilian president after months of unrest in which dozens of protesters have been killed.

But Sissi, a former military intelligence chief who Morsi appointed to head the army in August, said the elections were the only option.

“No one should think the solution is through the army; you must not be angered, and standing in a queue for 10 or 15 minutes is better than destroying the country,” the official Ahram newspaper quoted him as saying on its website.

Morsi last month closed ranks with the military in a press conference amid rumours of tensions between the presidency and the army, and after leaks of a state commissioned report implicating the army in human rights abuses.

The military had ruled Egypt after an uprising overthrew president Hosni Mubarak in early 2011, then handed power to Morsi after his election last June.

He sacked Tantawi after an August militant attack killed 16 soldiers at a border post, seizing on discontent within the military to purge commanders whose loyalties were in doubt, an aide said at the time.