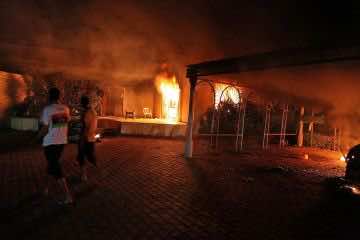 Two police stations were bombed early Sunday in the eastern Libyan city of Benghazi, a security official said, the second such attack in days that caused damages but no casualties.

“There were two new attacks today targeting Al-Gwarcha and Al-Uruba police stations, and both buildings have been lightly damaged,” the official said on condition of anonymity.

Benghazi, cradle of the 2011 uprising that toppled the regime of now slain dictator Moamer Kadhafi, is the scene of frequent attacks and assassinations targeting security officials.

Authorities blame radical Islamists for the violence,  including a deadly attack in September against the US consulate in Benghazi that killed Ambassador Chris Stevens and four other Americans.