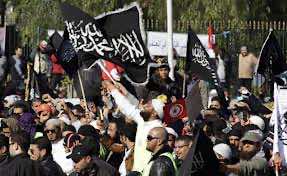 Tunisian forces prevented on Sunday Salafists in two cities in the southeast from pitching tents to preach in, the private
Shems FM radio reported, a day after police fired tear gas at the radical Islamists in the capital Tunis.

Police dispersed “without violence” Salafists trying to set up a tent in front of the headquarters of the governorate in Tataouine, 550 kilometres (around 365 miles) south of Tunis, the radio’s correspondent said from the site.

They also prevented residents who wanted to demonstrate against unemployment from pitching a protest tent also in Tataouine.

And in Medenine, 480 kilometres south of Tunis, security forces dispersed another group of Salafists who had gathered in the centre of the city to protest against “police harassment” and who shouted slogans against the interior ministry.

The radio said no violent incidents were reported in the two cities.

Sunday’s police intervention comes a day after police fired tear gas to disperse Salafists in a residential area in southwest Tunis, after they tried to set up tents to preach in.

“Police fired tear gas to disperse them as they were throwing rocks and petrol bombs,” on Saturday, interior ministry spokesman Mohamed Ali Aroui said, adding that calm had been restored later.

Tunisian news agency TAP, however, reported “violent clashes” between police and 1,000 Salafists who had come to set up large tents in the Tunis residential area.

TAP said the clashes erupted after prayers in the afternoon around the Bilal mosque in the Sidi Hassine Sijoumi area, where the Salafists used knives and Molotov cocktails.

On Sunday the  interior ministry said three Salafists were arrested in Sidi Hassine Sijoumi and warned of tough action against anyone who attacks the security forces.

Interior Minister Lotfi Ben Jeddou had warned on Wednesday he will bring to justice “anyone inciting to murder or hatred… or who pitch tents to preach in,” a clear reference to the Salafists.

Salafists are hardline Muslims who advocate their own version of fundamentalist Islam.

Since the 2011 revolution, they have been implicated in a wave of violence in Tunisia, with the authorities blaming them for an attack on the US embassy last September and the assassination of leftist politician Chokri Belaid in March.