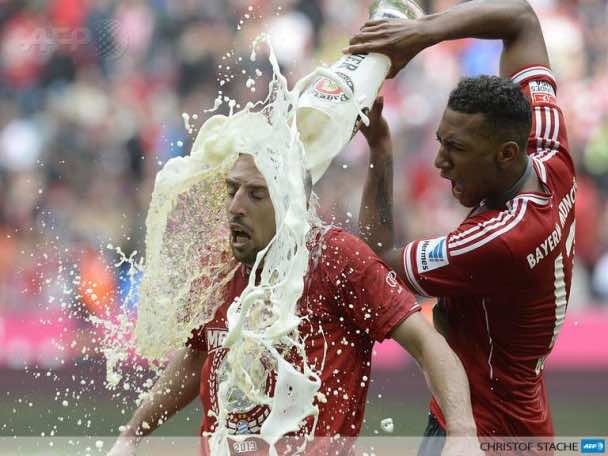 Bayern Munich’s defender Jerome Boateng emptied the contents of a huge glass of beer over the head of Franck Ribery in the midst of the celebrations in Munich on Saturday.

Franck Ribery, who plays as a midfielder, is known for his religious commitment.

The video posted on YouTube showed Ribery trying desperately to run away from his teammates who were chasing him with huge glasses of beer.

When Bayern Munich finally got their hands on the championship trophy, the players and team members chose to celebrate it by pouring alcoholic beverages on each other, but Ribery refused to take part in such celebration.

Because of his religious convictions, which forbids being in touch with alcohol, Ribery asked his teammates not to pour those beverages on him, but Boateng insisted and poured a big glass of beer on him.

AFP put a warning under the photo that reads, “Warning: Excessive consumption of alcohol can damage your health.”

While the photo was described by some websites as the football picture of the year, it seems that it didn’t please many Muslims who showed their disappointment on social media at the act of Jerome Boateng.