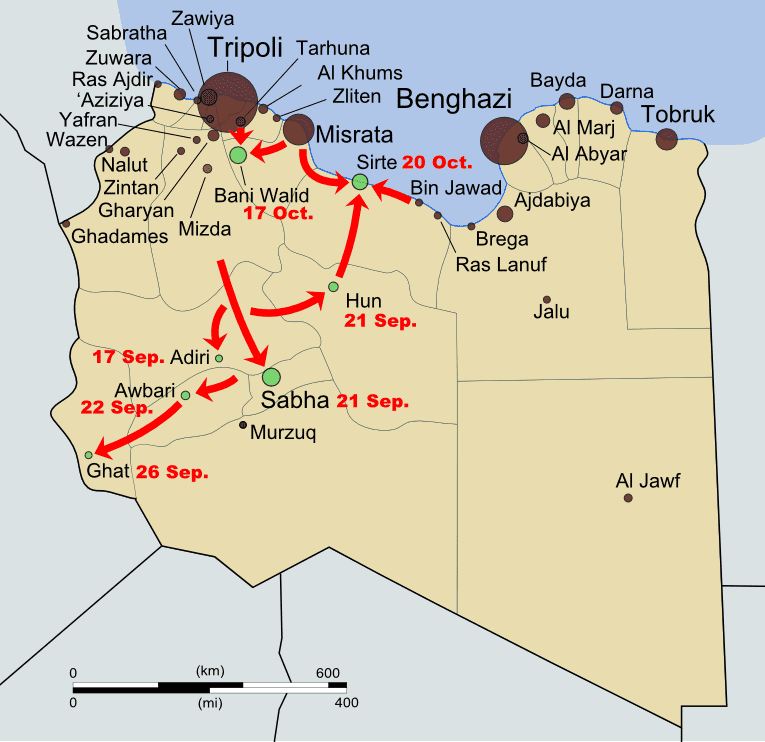 Below is a timeline of the unrest which has rocked Libya since the fall of strongman Moamer Kadhafi in October 2011.

–2011–
– October 20: Kadhafi captured and killed while trying to flee Sirte, his home town and the last major city to fall to NATO-backed rebels who rose up against his regime nine months earlier.

– December 12-13: Hundreds protest against the new ruling National Transitional Council in the eastern city of Benghazi, cradle of the revolt.

–2012
– May 8: Security forces repel armed demonstrators who attacked government headquarters in Tripoli to air their grievances, including the non-payment of cash stipends for former rebels.

– June: More than 100 die and 500 wounded in a week of tribal fighting southwest of Tripoli. Numerous tribal clashes take place, with nearly 50 killed in Kufra. In February, violence in the southeastern desert town kills more than 100.

– June 4: A militia of Libyan ex-rebels seizes control of the runway at Tripoli International Airport, surrounding aircraft with tanks and grounding all flights for hours.

– September 11: Four Americans, including US ambassador Chris Stevens, killed in an attack on the US consulate in Benghazi.

– September 21-22: Libyan protesters bloodily oust a jihadist militia from its headquarters and seize other paramilitary bases in Benghazi.

– October 24: Pro-government forces seize control of Bani Walid, one of the last bastions of Kadhafi’s regime. More than 50 die.

– November 20: Unidentified individuals assassinate the head of security in Benghazi.

– December 16: Armed men kill four policemen in Benghazi after the arrest of a suspect.

– December 29: An explosion rocks a Coptic church near the city of Misrata, east of Tripoli, killing two people, both Egyptians.

–2013–
– January 12: A failed gun attack takes place on the Italian consul in Benghazi.

– March 5: The car of interim leader Mohammed Megaryef comes under fire in Tripoli.

– May 11: Militiamen besieging the foreign and justice ministries in Tripoli for nearly two weeks withdraw. They had been demanding the passing of a law to exclude from office collaborators of Kadhafi.

– May 12: Two police stations are bombed in Benghazi, the second such attack in days that cause damages but no casualties.

– May 13: A car bomb explodes near a hospital in Benghazi killing and wounding dozens in the first attack targeting Libyan civilians since the revolt.