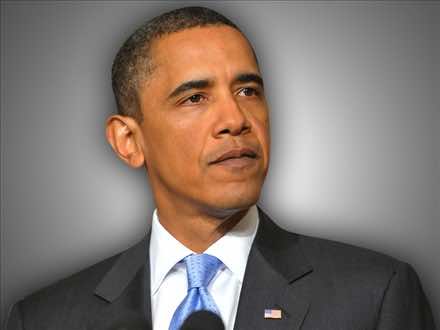 Seeking to quell a growing scandal, President Barack Obama said Monday it would be “outrageous” if US tax authorities targeted conservative groups fiercely opposed to his White House.

As he battled growing political woes, Obama also denied his White House had engaged in a cover-up to downplay the impact to his re-election campaign of the attack on the US mission in Benghazi last year, which killed four Americans.

Obama sought to defuse Republican fury and political damage to his administration over revelations that the Internal Revenue Service had subjected conservative grassroots groups to extra scrutiny.

“If in fact IRS personnel engaged in the kind of practices that have been reported on and were intentionally targeting conservative groups, then that’s outrageous. And there’s no place for it,” Obama said at a press conference with British Prime Minister David Cameron.

“They have to be held fully accountable because the IRS, as an independent agency, requires absolute integrity and people have to have confidence that they’re applying it in a nonpartisan way.”

Republicans, spotting a new political opportunity to damage Obama’s political standing, have seized on reports that emerged last week over the IRS’s efforts to assess tax-exempt status of conservative groups.

The IRS cloud was the latest political drama to hit the Obama administration as the president struggles to enact his second term agenda in a polarized Congress just four months after his inauguration.

Obama has also been hit by claims that his administration tried to downplay the political impact of the Benghazi raid, and changed talking points given to top US officials to cast doubt on whether the attack was terrorism.

The president said that the campaign by Republicans and conservative media, which hit new heights with House of Representatives hearings on the issue last week, was politically motivated.

“The whole issue of talking points frankly throughout this process has been a sideshow,” Obama said.

The White House had previously claimed that the talking points on the affair given to UN ambassador Susan Rice before she went on talk shows in September were only changed for stylistic reasons.

Republicans charged that her statement that the attack appeared to be spontaneous and a reaction to an anti-Muslim YouTube video produced in the United States was proof the administration acted mendaciously.

They say they have evidence that shows that the talking points were systematically stripped by the administration to disguise the involvement of known Islamic extremists and an Al-Qaeda-linked group in Libya.

The attack in Libya came at a crucial time of Obama’s re-election campaign when he was running on a platform of keeping Americans safe and largely neutralizing the threat from Al-Qaeda.

Obama said that suggestions the White House was engaged in a cover-up did not make sense because he said he sent a top aide to Capitol Hill three days after the attack to detail evidence that it was plotted by extremists.

“If this was some effort on our part to try to downplay what had happened or tamp it down, that would be a pretty odd thing that three days later we end up putting out all the information,” Obama said.

“Who executes some sort of cover-up or effort to tamp things down for three days? So the whole thing defies logic and the fact this keeps on getting churned out frankly has a lot to do with political motivations.”

Several senior US officials testified last week that Washington could have done more to safeguard its mission in Benghazi ahead of and during the attack on September 11, 2012.

Gregory Hicks, the deputy head of the US mission in Libya and the first US official who was on the ground to speak publicly about what happened, provided a minute-by-minute account of the events on that night.

Hicks testified that he and many others knew from the start that the assault on the Benghazi compound was a deliberate act of terror, and said he was shocked when Obama’s administration publicly argued otherwise.

He told the House Oversight and Government Reform Committee he was “stunned” after Rice went on television to say the attacks were a spontaneous reaction after a demonstration against an anti-Islam video.

The White House argues that the circumstances of the attack have been probed by a review board ordered by then-secretary of state Hillary Clinton, and its recommendations had been acted upon.