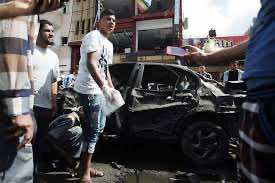 A powerful car bomb exploded Monday near a hospital in the Libyan city of Benghazi, killing and wounding dozens in what officials said appeared to be the first such attack on civilians since Moamer Kadhafi’s ouster.

Officials gave contradicting death tolls, however, as information trickled in about the devastating bombing which destroyed a restaurant and damaged cars and buildings near Al-Jala hospital in the centre of Benghazi.

Young demonstrators took to the streets to protest against the insecurity still ravaging the city which was the crade of the uprising against Kadhafi, taking up one of its  rallying cries : “Benghazi, wake up.”

Deputy Interior Minister Abdullah Massoud said 15 people were killed and another 30 wounded in the attack. He stressed it was a “preliminary toll”.

Dozens of people, many of them youths, rushed to the scene, some even volunteering to gather body parts and place them in clear plastic bags, AFP journalists reported.

Witnesses said children were among the casualties, but it was not immediately clear if they were dead or wounded.
The bombing wrecked cars and left debris scattered on the ground.

The deputy interior minister said the blast “totally destroyed a restaurant” and damaged buildings near the hospital.

Justice Minister Salah al-Mirghani denounced a “terrorist act” and vowed the authorities would “do everything possible to arrest the criminals”.

Mirghani urged national “unity” as commentators noted the bombing hit Libyan civilians in broad daylight in the first attack of its kind since the 2011 uprising.

A Benghazi security official said: “We don’t know yet whether the attack targeted civilians or a particular individual.”

The UN Support Mission in Libya condemned the “criminal attack” and urged all Libyans to put up a united front against “all attempts at destruction, terrorism and the destabilisation of Libya.”

Benghazi, Libya’s second city, has seen a wave of violence in recent weeks.

But previous attacks, bombings or assassinations, have rocked the city by night or in the early hours of the day when the streets are empty, and have hit non-civilian targets, namely security officials.

Four police stations have been bombed in Benghazi in recent days — two on Friday and two on Sunday — causing damage but no casualties.

Authorities blame radical Islamists for the violence, including a deadly attack in September against the US consulate in Benghazi that killed ambassador Chris Stevens and three other Americans.

“We still don’t know if this bombing targeted civilians or one particular individual,” a security official said.

The latest violence also comes days after the United  States and Britain withdrew some staff from their embassies in Tripoli citing security concerns over a flare-up between militiamen and the authorities.

The British Council cultural agency also closed its Libyan office for a week for the same reason, and oil giant BP said it had pulled out some non-essential overseas staff out of the country.

Last week the United States issued a travel advisory warning against “all travel to Benghazi” and other areas in Libya.

The militiamen, mostly former rebels who helped topple Kadhafi, had surrounded the foreign and justice ministries to press for a vote in the national assembly barring former officials of his regime from holding government jobs.

They lifted the siege on Sunday, ending a two-week standoff, days after the vote was passed by the General National Congress and a pledge by Prime Minister Ali Zeidan to reshuffle the cabinet soon.

The militiamen who helped topple Kadhafi were hailed as heroes after the uprising but since then they stand accused of many of the country’s ills, notably the instability that still plagues parts of the North African nation.

Two French guards and a few locals were wounded and the bombing caused extensive damage to the embassy and private homes in a residential neighbourhood.

It also prompted France to reduce the number of personnel at its embassy.

France and Britain led the creation of a NATO no-fly zone in Libya in 2011 when the rebellion against Kadhafi began.