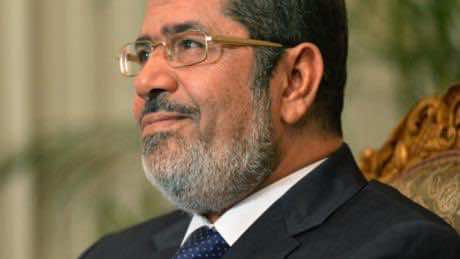 The “Tamarod” (Rebellion in Arabic) campaign seeks to withdraw confidence from the Islamist leader because he has failed the revolution that brought him to power, they said.

Since its launch nearly two weeks ago in Cairo’s Tahrir Square, Tamarod’s petition has garnered over two million signatures.

“Because security has not returned, because the poor have no place, because I have no dignity in my own country… we don’t want you anymore,” the text reads.

“The campaign was launched because the president is no longer able to manage the country,” Tamarod spokesman Mahmud Badr told AFP.

“We have gathered over two million signatures to withdraw confidence from the president (since May 1), which shows that people have suffered a lot from the political crises and the economic situation,” he said.

Tamarod has called for a mass protest outside the presidential palace on June 30 when Morsi marks one year in power.

Morsi’s Freedom and Justice Party (FJP), the political arm of the Muslim Brotherhood, has dismissed the campaign.

“The only recognized democratic mechanism is the ballot box. Everyone must respect the results of the ballot box no matter what they are,” said Ahmed Rami, spokesman for the FJP.

Morsi came to power a year ago in Egypt’s landmark elections following the uprising that toppled Hosni Mubarak after 30 years in power.

He got 51.7 percent of the votes in elections held last June, narrowly beating Ahmed Shafiq, a Mubarak-era prime minister.

But opponents accuse Morsi of having polarized the country by placing the interests of his Muslim Brotherhood above the nation’s.

His tenure has been marked by severe economic crisis, political turmoil and deadly protests.