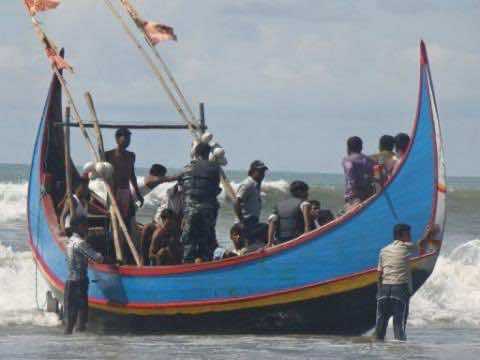 A boat carrying up to 150 Rohingya Muslims fleeing a cyclone has capsized off Myanmar’s coast, the UN said on Tuesday, heightening fears over the storm which threatens camps for tens of thousands of displaced people.

The boat hit trouble on Monday night after it left Pauktaw township in Rakhine state, said a spokeswoman for the UN Office for the Coordination of Humanitarian Affairs, adding there were an unknown number of missing as “they were travelling to another camp ahead of the cyclone”.

A Rohingya Muslim living in Pauktaw said a boat carrying some 200 people had left seeking higher ground along the coast and told AFP by telephone that many were feared dead at sea.

About 140,000 people displaced by communal violence last year are living in flimsy tents or makeshift housing across coastal areas of Rakhine — exposed to Cyclone Mahasen, which is gathering strength in the Bay of Bengal.

The cyclone is expected to make landfall somewhere near the Myanmar-Bangladesh border on Thursday night, according to an update by Myanmar’s Department of Meteorology and Hydrology.

Bangladeshi authorities on Monday warned millions of people that the cyclone could barrel into their coastal homes, while Myanmar’s army has been deployed to help evacuate those most at risk.

The UN and other aid agencies have for months warned of the dangers this year’s monsoon poses to displaced people in Rakhine. Most of them are stateless Rohingya Muslims uprooted by two outbreaks of deadly religious violence since June last year.

“If the government fails to evacuate those at risk, any disaster that results will not be natural but man-made,” said Brad Adams, Asia director at Human Rights Watch.

The warnings revived memories of Cyclone Nargis, which devastated Myanmar’s Irrawaddy Delta in May 2008 and killed about 140,000 people.

The UN’s disaster assessment agency said Sunday that preparations were under way to provide shelter for up to 13,000 displaced people in the state capital Sittwe, amid fears a tidal surge could sweep through camps in low-lying areas.

There were signs of increasing desperation among displaced people Tuesday in areas near Sittwe as warnings over the cyclone intensified.

Some people reportedly refused to leave their shelters for fear of having nowhere else to go.

“We are very worried about the cyclone… we do not have enough food to eat. Many people are in trouble. But we have no idea what we should do,” one displaced Rohingya told AFP by telephone.

The cyclone threatens to worsen the humanitarian crisis in Rakhine, which was sparked by last year’s deadly violence that saw around 200 people killed and the homes of tens of thousands of people razed.

Myanmar views its population of roughly 800,000 Rohingya as illegal Bangladeshi immigrants and denies them citizenship.

Thousands of Rohingya have since fled in rickety and overcrowded boats and scores have died making the perilous journey south towards Thailand and Malaysia. 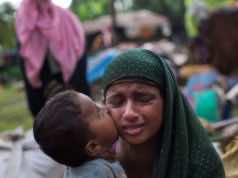 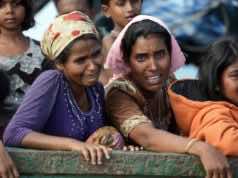 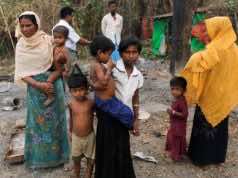 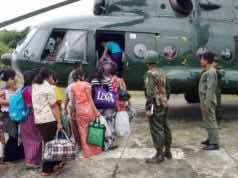 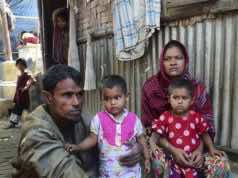