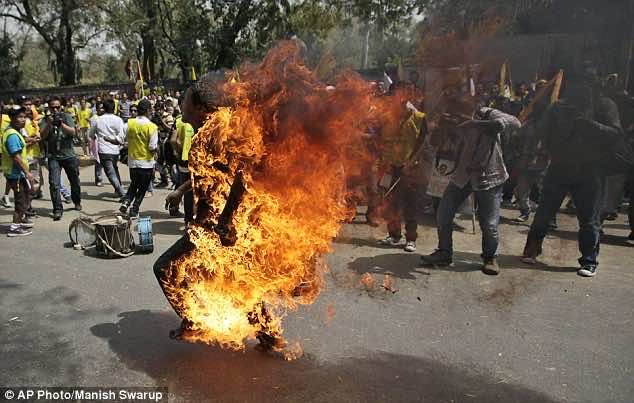 A Moroccan street vendor in the southern city of Marrakesh died in hospital after setting himself on fire in protest at\ having his goods confiscated by the authorities, various sources said on

Mbarek el-Karassi, 32, died on Monday evening from severe burns to the ace, hands and stomach, said Mohammed Ghalloussi, a local representative of the Moroccan Association for Human Right.

He had been held in intensive care at the Ibn Toufail hospital after dousing himself in petrol and igniting the fuel on Saturday in the poor Marrakesh neighbourhood of Essaada.

Karassi’s brother-in-law, Abdelali Idrissi, said the young man had started by selling fruit and vegetables in the street, and then began selling old furniture, until a local official confiscated his goods.

“He begged the authorities to give him back what they had taken but they refused, so he felt deeply aggrieved and set himself on fire,” Idrissi told AFP.

“He was just trying to live a decent life. But they confiscated his goods,which were his only capital and means of supporting himself.”

The interior ministry spokesman could not be reached for comment, despite several attempts by AFP to contact him.

Some 40 people protested in Marrakesh on Monday evening, after news of Karassi’s death emerged, shouting slogans including: “This is a scandal! Our youths are in danger!”, according to witnesses.

A larger demonstration was expected on Tuesday too when Karassi was due to be buried.

Morocco has witnessed numerous self-immolations, especially by unemployed graduates, since the start of the Arab Spring uprisings, which began in Tunisia in December 2010 when a street vendor set himself on fire for the same reasons as Karassi.