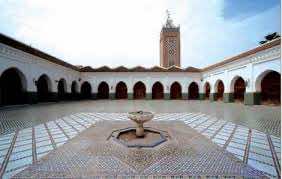 King Mohammed VI, Commander of the Faithful, decided to personally finance the reconstruction of the Taroudant Grand Mosque which was partially destroyed by fire, a statement by the Endowments and Islamic Affairs Ministry said on Tuesday.

The statement added that, after having submitted to the Commander of the Faithful the preliminary results of the expertise conducted the day after fire broke out, the Sovereign gave to the Endowments and Islamic Affairs minister his instructions to rebuild the mosque.

The reconstruction works include:

1- Doing the necessary reinforcements to ensure security inside the mosque and near it.

2- Filling the gap caused by the mosque temporary closing.

3- Stepping up studies inherent to revamping the mosque.

5- Ensuring that the deadline of studies, procedures and reconstruction does not exceed two years.