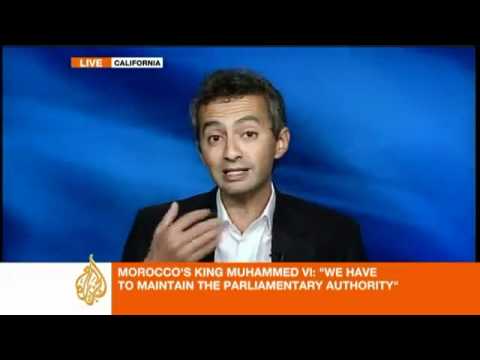 Many people around the Arab world have reservations on what is termed “The Arab Spring” and think that the upheavals in some Arab countries are the outcome of a well-planned conspiracy against Arabs. What makes this belief stronger is the social and political anarchy that perpetually characterizes most “Arab Spring” countries and their multidimensional problems. Conspiracy theorists argue that Arab revolutions paved the way towards Israel’s complete political and economic control over the Middle East.

The well-known and controversial Islamic eschatologist Cheikh Imran Houcein spoke in 2003 of a well-knit scenario to topple Arab regimes and predicted that these regimes would fall like dominos after the masses took to the streets. He noted that media would kindle and intensify the rage at Arab regimes. Ultimately, “the world of Islam is now going to rise up and all these governments are going to be swept away…I tell you, this will be drama worthy of Hollywood when it comes,” he said.

Imran’s prediction was realized eight years later and the question many people now ask is: who benefits from this creative chaos? Some might argue that the fruits of Arab revolutions can’t be ripe in such a short time because revolutions usually pay off in the long-term. However, what if some of those advocating change and inciting people to protest and revolt are proved to be “pushed” and funded by foreign opponents? Will these revolutions continue to be credible for people?

The controversial Moroccan journalist Ahmed Reda Benchemsi has co-founded a website advocating change in the Arab world called “Free Arabs.” Benchemsi founded, published and edited two famous magazines in Morocco, TelQuel and Nishan, before immigrating to the U.S.A. He co-founded the website with Nasser Weddady, who is introduced on the website as Civil Rights Outreach Director at the American Islamic Congress and co-founder of Free Arabs. This activist was profiled in The Atlantic as “quietly pulling strings from Boston behind the Arab revolts.”

An investigative report published on The Electronic Intifada website states that Weddady, the son of a prominent Mauritanian diplomat, played a pivotal role in the “Arab Spring” revolts, was among the “top four most-influential Twitter users of the Arab Spring uprisings” and “is networked in every country in the region.” What is striking in the report by The Electronic Intifada is that Weddady, the American Islamic Congress (AIC) organization where he is a staffer and the Free Arabs website he co-founded with Benchemsi receive significant financial support from right-wing pro-Israeli funders.

The Free Arabs website, a self-proclaimed portal to “democracy, secularism and fun,” “eschews criticism of Western policies towards the Middle East while promoting U.S. military intervention in Syria.” Some commentators branded it a “portal for Zionist ideologies” after reading the Max Blumenthal report.

The report lists a number of AIC right-wing donors and funders who have pumped millions of dollars into pro-Israeli organizations “including groups involved in settlement activity and the Friends of the IDF, which provides assistance to the Israeli army.” These same groups pump money into the American Islamic Congress which has “a disturbing history that stretches back to the invasion of Iraq” and which “despite its claim to promote tolerance… has depended on substantial support from the very same elements that fought tooth and nail to sabotage the Islamic Society of Boston, and which seem determined to undermine Muslim communal organizing efforts across the country.’’

After providing arguments to prove that the American Islamic Congress organization and Free Arabs website are affiliated to and supported by right-wing pro-Israeli circles and foundations in the United States, the investigative report concludes that Washington uses strategies to influence the course of the so-called “Arab Spring”. Serving like pawns at the hand of the pro-Israeli circles, “Weddady and his colleagues are earning new opportunities, and ample compensation.”

Perhaps Ahmed Benchemsi found no words to defend his friend and colleague Nasser Weddady ; thus, throughout the article he kept disassociating himself from AIC. Ahmed Benchemsi wants to say that if the AIC connives with Zionist circles, not all who cooperate and associate with it are also part of the game. He cleverly expressed his argument in a mathematical equation: “V is helped by W who works for X who takes money from Y who otherwise stands for Z ==> therefore V is guilty of Z.”

Mr. Benchemsi rejects the fact that his website is funded by Islamophobic por-Israeli funders and claims that the $25,000 spent on the website since its inauguration was “all paid by [his] personal savings and a donation of an Arab journalist friend who vowed to remain anonymous, i.e., away from the slander circus.” Mr. Benchemsi’s response’s conspicuously lacks concrete evidence or proofs to refute the specific documented allegations against AIC and Free Arabs; this fact made some commentators trust Bluementhal’s investigation. In a comment on Mr. Benchemsi’s response, Rachid from Morocco said:

“I have read Max’s piece, and to give both stories a chance, I have read yours too. To be honest, I find Max’s side more trustworthy. The whole Arab spring is not nothing but Zionist-imposed movement to destroy old Islamic values in the Arab /Muslim states. The way they do it, is by giving people like you the idea that you are fighting for a better tomorrow; but in the background you are helping to fulfill imperialistic policies. Don’t get me wrong, I hate aristocratic and religious zealots myself. They are the ones that got us in this mess. …Hopefully you understand that the Zionist enemy is using you in the game of chess, like the pawn you are.”