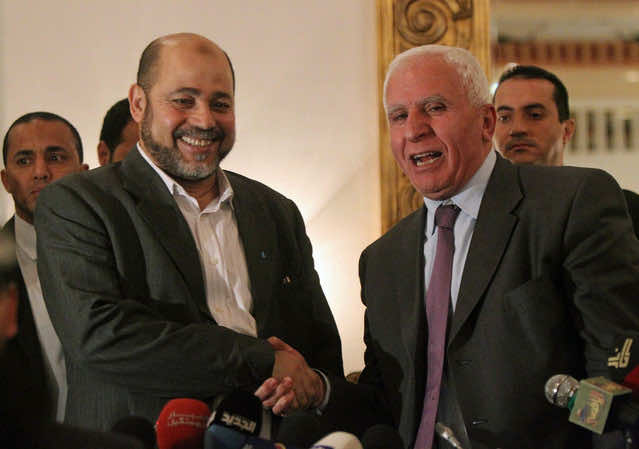 Rival Palestinian factions Fatah and Hamas have set a three-month timetable to form a unity government and organize elections, officials from both sides said on Wednesday.

The agreement came during a meeting late Tuesday between Fatah’s official in charge of reconciliation affairs, Azzam al-Ahmed, and his Hamas counterpart Mussa Abu Marzuq, held at Egyptian security services headquarters in Cairo.

“We must take immediate steps to agree on the Palestinian National Council’s (PLO parliament) electoral law and set a date for elections,” Ahmed told the official Voice of Palestine radio.

“We have said that all these measures must be carried out within three months,” he added.

Hamas spokesman Sami Abu Zohri told Agence France Presse the two groups had decided to “finalize all reconciliation issues in three months, including that of the national unity government… and legislative and presidential elections.”

Palestinian president Mahmoud Abbas of Fatah announced the start of talks on forming a unity government in April, after his prime minister Salam Fayyad, who is acting as cabinet caretaker, resigned.

Hamas, which governs the Gaza Strip, never recognised Fayyad’s authority as Palestinian premier, continuing instead to recognize its own prime minister Ismail Haniya.

The two movements signed a reconciliation deal in Cairo in 2011, pledging to set up an interim consensus government of independents that would pave the way for legislative and presidential elections within 12 months.

But implementation of the accord stalled over the make-up of the interim government, and a February 2012 deal signed by Abbas and Meshaal in Doha intended to overcome outstanding differences was opposed by Hamas members in Gaza.

Meshaal to Cairo for talks on Palestinian reconciliation