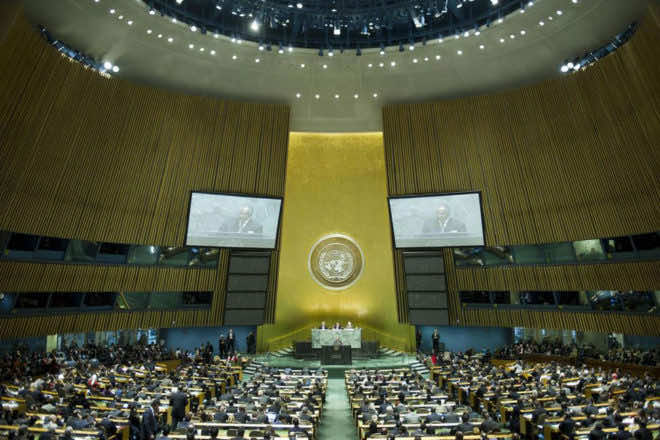 The UN General Assembly on Wednesday condemned the Syrian government’s “escalation” of the country’s war and backed the role of the opposition coalition in transition talks.

But Russia, Syria’s key diplomatic ally, fiercely opposed the resolution, branding it a potential obstacle to peace negotiations expected to be held in Geneva next month.

And only 107 countries in the 193-member assembly backed the text, down from 133 when the last Syria vote was held in August.

The United States, Britain and France joined Arab countries in supporting the resolution which expressed “outrage at the rapidly increasing death toll,” now estimated at more than 80,000 by Syrian activists.

The assembly “strongly condemns the continued escalation in the use by the Syrian authorities of heavy weapons”, including “ballistic missiles” against civilians, said the resolution, which was drawn up by Qatar and other Arab states.

On political efforts to end the war, the assembly demanded all sides work to “implement rapidly” a communique agreed by the major powers in Geneva in June last year laying out the steps toward a transitional government.

The resolution welcomed the opposition Syrian National Coalition “as effective representative interlocutors needed for a transition.” This phrase infuriated Russia which said it would encourage the opposition to step up “armed actions” against the Syrian government.

The Arab League has recognized the coalition as Syria’s legitimate government. There was no recognition in the UN text but Arab states are said to be planning moves to get the coalition into Syria’s UN seat later this year.

Russia and the United States agreed to press for a new international conference on the war which is expected to be held in Geneva next month. Russia’s UN ambassador Vitaly Churkin wrote to all 193 UN members ahead of the vote to slam the resolution as “one-sided and biased“.

Russia and China have vetoed three UN Security Council resolutions, proposed by western nations, aiming to step up pressure on President Bashar al-Assad over the conflict.

“The consequences of this crisis are growing more dire not only within Syria, but across the region,” said deputy US ambassador Rosemary DiCarlo, who added that backing the resolution was in line with efforts to set up a peace conference.

France’s UN ambassador Gerard Araud said the resolution would help the opposition to unite for any peace conference.

“This is a substantive draft that reflects the horrific situation on the ground and pushes for a political solution,” said Germany’s UN ambassador Peter Wittig.

Qatar’s UN ambassador Meshal Hamad Al-Thani called the resolution “fair and balanced” but the text was slammed by Syria’s UN ambassador Bashar Jaafari as an attempt “to escalate the crisis and fuel violence in Syria.”

The UN assembly passed a resolution condemning Syria in August last year with 133 countries in favour, 12 votes against and 31 abstentions.

Diplomats said the lower number voting in favor this time reflected the international divisions over Syria and doubts about how it can be ended.

The resolution called for “urgent” international financing to help countries struggling with more than 1.4 million Syrian refugees. Jordan in particular has said the refugees are now a threat to its stability.