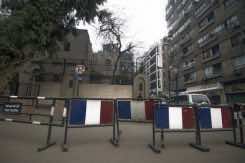 An Al-Qaeda-linked cell broken up in Egypt at the weekend planned to bomb the French and US embassies in Cairo, state news agency MENA quoted investigators as saying on Wednesday.

“The accused planned suicide car bombings outside the embassies of France and the United States in Egypt,” MENA said

In the case of the French mission, the motive was to register a protest “against French military intervention in Mali,” investigators were quoted as saying.

There was no immediate information as to why the American embassy was a target.

On Saturday, Egyptian Interior Minister Mohamed Ibrahim said police had arrested three members of a “terror cell” involved in a transnational plot to bomb a Western embassy and other targets.

Ibrahim, who did not identify any specific target, said the suspects were captured with 10 kilograms (22 pounds) of fertiliser, and a computer containing instructions on bomb-making.

MENA said the three were Egyptian and quoted security sources as saying they had been among prisoners who managed to escape from prison during the 2011 uprising against former president Hosni Mubarak.