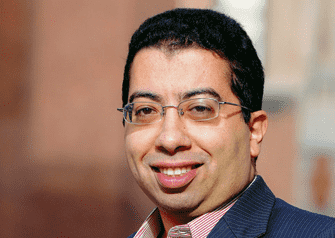 From a pool of 200 individuals representing more than 70 countries, the Moroccan Soulaymane Kachani was named World Economic Forum Young Global Leader for the 2013 class. Soulaymane Kachani who works as a vice dean of Columbia Engineering and a professor in the Department of Industrial Engineering and Operations Research of Columbia University in the city of New York, was one of six academics selected this year.

Soulaymane Kachani was nominated Global Leader thanks to his track record of successful leadership. As a vice dean of the Engineering School, Soulaymane Kachani supervises academic programs including undergraduate, master’s, and PhD programs. He also works to build educational bridges between top universities in Asia, Europe and South America.

“I am thrilled to join this distinguished group of individuals,” says Kachani, “and excited to represent Columbia and further promote and raise awareness about important educational issues, particularly global collaborations in higher education and the future of online education,” Mr. Kachani was quoted in the Colombia University’s website  as saying.

The World Economic Forum is an independent international organization committed to improving the state of the world by engaging business, political, academic and other leaders of society to shape global, regional and industry agendas. Kachani is expected to participate in the Annual Meeting in Davos as well as the regional conferences of the World Economic Forum, and research and initiatives, representing the views and interests of young leaders.

Kachani holds a Diplôme d’Ingénieur in applied mathematics from Ecole Centrale Paris and a Master of Science and a PhD in operations research from MIT. He also earned several awards such as the Columbia Engineering Alumni Association Distinguished Faculty Teaching Award, the Avanessians Diversity Service Award, the Kim Award for Faculty Involvement, and the Egleston Distinguished Service Award.