Fez- Can Jews and Muslims coexist and live peacefully together in one nation? This may seem impossible in regard to the amount of hatred most people from both parts harbor for each other through history. 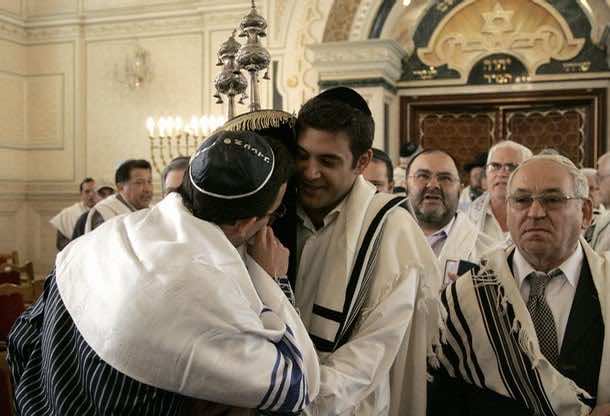 By
youssef El kaidi
-
Youssef El Kaidi is a PhD candidate at the University of Sidi Mohammed Ben Abdelah Fez.
May 15, 2013
Spread the love

Fez- Can Jews and Muslims coexist and live peacefully together in one nation? This may seem impossible in regard to the amount of hatred most people from both parts harbor for each other through history.

The antagonism between Jews and Muslims nurtured by religious fanaticism, cultural clashes, political and sectarian wars, and misunderstanding continue to grow today, especially with the unresolved issue of Palestine.

However, Jews once lived peacefully in Morocco (and some 3000 Jews continue even today), traded with Moroccan Muslims, neighbored them, and shared a lot in common. The history of Jews in Morocco is undoubtedly a history of religious tolerance, coexistence and mutual respect; it’s a lesson to the world that peace can (and should) prevail irrespective of people’s beliefs.

Today, after the mass immigration of Jews to Palestine in the fifties and early sixties, only 3000 Jews remained in Morocco, most of whom live in Casablanca. It’s true that Morocco lost a large Jewish community? but it strengthened its efforts to keep the Moroccan Jewish heritage and its memory alive. Thanks to Morocco’s efforts, Jews across the world have succeeded in maintaining their identity and their personality and a lot of Moroccan traditions, especially those associated with celebrations and lifestyle. In addition, Morocco welcomes all efforts to help restore the Jewish heritage and preserve it.

King of Morocco Mohammed VI personally takes interest in preserving the Jewish cultural heritage, oftentimes spending from his own money on projects of conservation and restoration. Also, the Jewish legacy is considered by Moroccan people as national heritage in the first place and they take it upon themselves to protect and preserve this heritage. It may be surprising to many to know that the guardians guarding Jewish cemeteries in Morocco are Muslims.

Last February, Morocco reopened the Jewish synagogue Slat Lafassiyyin in Fez after its restoration. In a letter addressed to the participants at the opening ceremony of the Jewish Synagogue, King Mohammed VI called for the “restoration of all synagogues in other Moroccan cities so that they become not only places of worship but also spaces for cultural dialogue and for the revival of Morocco’s civilizational values.” He also stressed that “the deep-rooted civilizational traditions of Moroccans derive their spirit from the culture of coexistence, tolerance and harmony among the various constituents of the nation.”

The king’s efforts for the protection and preservation of Jewish heritage sometimes go beyond Morocco. The Times of Israel news outlet published a report entitled “Why is the Moroccan king funding the Jewish sites?” in which the writer, Canaan Liphshiz, seems surprised at the king’s deep commitment to preserving Jewish heritage in Morocco and elsewhere. The report mentions the king’s generous financial support for The Cape Verde Jewish Heritage Project, which amounted to $200,000 for the years 2011-2012.

“The Cape Verde Jewish Heritage Project has a board stuffed with prominent Jewish Washingtonians, but its funding comes almost entirely from one man — King Mohammed VI of Morocco. According to the group’s US tax filings, the king was the organization’s sole donor in 2011 and 2012, giving $100,000 each year,” says Canaan Liphshiz.

It’s worth noting that Morocco’s 2011 constitution recognized the Jewish cultural influence in Morocco and stated clearly that the country has, to some extent, been ‘nourished and enriched … [by] Hebraic influences.’ So, will Israel treat Morocco the same way and protect Morocco’s historical monuments like the Moroccan Quarter, the Moroccan Gate, etc in Jerusalem?