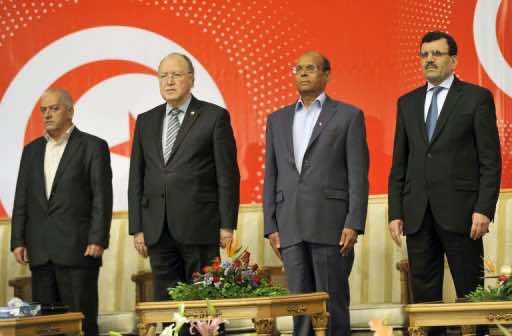 President Moncef Marzouki called on leaders of Tunisia’s radical Salafist movement on Thursday to reject armed violence, saying during a meeting of “national dialogue” that the nation faced a terrorist threat.

“I am waiting for a clear condemnation of terrorism from the Salafist sheikhs in Tunisia,” he said, adding that the state was “determined to act against the dangers and to use all the military and security means at its disposal.”

“Everyone knows that Tunisia is now confronted by a terrorist threat from areas of instability both near and far,” Marzouki added, calling on Tunisians “to close ranks in the face of religious fanaticism.”

The president criticised in particular the Salafists’ control of mosques, their acts of violence and the practice of replacing the national flag with the black Salafist flag, a practice that has shocked many in Tunisia.

Yet Marzouki said the Salafist movement, which advocates an ultra-conservative brand of Sunni Islam, was a part of Tunisia’s social fabric and urged his countrymen to coexist, whether they were “modernists, Islamists or Salafists.”

Since the January 2011 revolution that overthrew president Zine El Abidine Ben Ali, Tunisian security has been severely challenged by the rise of militant Islamists, who are blamed for a wave of violence across the country.

Marzouki was heckled during his speech when he expressed his opposition to the sight of female students wearing the niqab while sitting exams, alluding to the ban on the full face veil in some universities.

The “national dialogue” was organised by Tunisia’s main labour union, the UGTT, and gathered around 100 political parties, NGOs and employer organisations.

The meeting follows a month of talks between the parties in power and the opposition, which resulted in an accord on Wednesday on some of the thorny issues that have blocked the long-delayed drafting of the new constitution.

The dialogue launched by the UGTT is to focus on ways of ending the political instability that has rocked Tunisia, and which peaked after the assassination in February of secular opposition leader Chokri Belaid.

Reflecting the lingering mistrust, Ziad Lakhdar, who replaced Belaid as head of his Democratic Patriots party, again accused the ruling Islamist party of his murder, prompting its leader Rached Ghannouchi to quit the meeting temporarily.