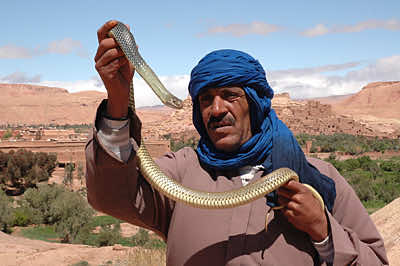 The old man spends his life playing with snakes. He wanders all the time in the forests and climbs the mountains to look for big snakes, catches them, puts them in his box and then sells them. His greatest joy is when he fights wild cobras. Since his childhood, he has been fond of running after those snakes. His mother told him once: “Hey you, if people catch snakes, you have to catch the biggest one…never catch scorpions. Better be killed by a snake than by a scorpion”.

His mother always encouraged him not to be afraid of death. She would tell him that: “Death has the same taste, a bitter one. Death is the same no matter how one dies.” So she told him that: “ I will be proud of you if you are killed by a big and huge snake.” She would say, “People will be talking about you all the time…your name will stay engraved in the memory of generations after generations.”

In that village, people don’t talk about writers, poets or generals. People talk only about snake fighters. The mother wants her son’s name to be on the tongue of the small and the big. The more she pushes him to death, the further death gets from him.

In winter, the old man stays in the village surrounded by the little kids who enjoy listening to his stories. He tells them about his adventures with all kinds of snakes. He names them all. He knows of the snakes’ names as he knows the names of his own children. He has special stories about every kind of snake. One snowy day while he was talking about his past trips to the kids, a little boy asked him, “Please, Baba, I want to take your flute and box of snakes and start catching them; what advice can you give me?”

The old man pondered for a while, looked at the kid and said, ”Listen to me carefully, you have to know that little and weak fake snakes come to look for you while real snakes wait for you to come and look for them. You have to be aware of these facts. When a cobra is asleep or hiding in its hole, you have to sing your best songs for it if you want to make her come out to dance for you. Real cobras do not sing for any music; you have to know their favorite rhythms; each one has its favorites and this is your duty to know what music, and what rhythms for what snake. They are like us. No, No, this is not true. We, humans, are like snakes. Each one of us has his favorite song that makes his or her body and heart dance…therefore, if cobras don’t hear their favorite music, they never come out of their holes…and in case they come out of their holes, the real snake fighter catches them from the neck not, from the tail….you have to catch them from the head, that way you avoid their biting….don’t fear death, our history talks about those who died by snakes, not about those who kill snakes…our history talks about those who sacrifice their lives to make others live and enjoy watching snakes in markets and touristic squares…If we do not fight snakes, they will make us leave this village. They will kill us and attack us at home…That’s why we keep killing them: a snake can either kill you or you kill him…look…”

The old man opened his box and freed a big black cobra; when the kids saw it, they ran in all directions, frightened by the huge snake…The old man laughed and said to himself sarcastically: “you see, for whom are you telling all your stories, old man…this generation of youth run away when they see snakes…our parents , God bless their souls, taught us to run after snakes not to run away from them…When we were kids, the snakes ran away from us…this generation is really unreliable. Are these the generation that will protect the village from the attacks of snakes? I don’t think so. I am afraid about the future of the village and its people. Maybe in the future, the snake fighters will dance for the snakes. May you bless this village, dear lord…”

That night, all the mothers came to the old man asking him to go out and look for the kids who had not come back. They said that his cobra frightened them and that was the reason why they left the village. Years passed and the youth never came back. Some snake fighters who visit the city told the mothers that they saw their kids in the city watching the snakes in Jemaa el-Fnaa in Marrakesh with tourists. They told them that it is hard to differentiate between their children and the tourists. They even mentioned to them that the children no longer speak their native languages. They dress like tourists, speak like tourists and live like tourists…an old lady cried and said: “You see, mothers, I have always warned you not to give birth to tourists. We need citizens of the village, not tourists.”

The mothers cry all the time…they still live for that one hope: to see their children come back to the village. They talk about the deaths of sobras and snakes. But the children can never forget the old saying that grandmothers say: when one is bitten by snakes, he starts fearing ropes.

Every day, mothers wait on the main road that goes to the city with every sunset, waiting for the return of their children, and when dusk falls down, they go to the old man’s house and ask him: Why did you free the cobra from its box? Why did you frighten our children?

These questions still hurt both the mothers and the old man and will keep making their hearts bleed while waiting for the return of the unreturned. Some say they will never return, but mothers believe that the kids were born in the village and they will come back to their village. They say that no matter what happens, the sons of the village will run back to the village.