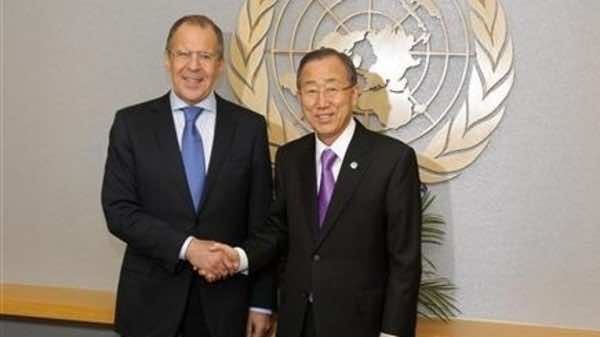 U.N. chief Ban Ki-moon and Russia agreed Friday that a peace conference on Syria should be held “as soon as possible” even as Moscow defied growing global pressure over its arms supplies to the Damascus regime.

Ban met Foreign Minister Sergei Lavrov ahead of talks later Friday with Russian President Vladimir Putin about an impending international meeting on Syria that should include representatives of the two warring parties for the first time.

“There are high expectations and the meeting should be held as soon as possible,” Ban told reporters alongside Lavrov. Russia’s top diplomat added: “The sooner this conference is held, the better.”

But Lavrov still cautioned that it was too early to name the date of the Geneva talks — now expected for the first half of June — because the actual makeup of the Syrian delegations had not yet been decided.

“We have to come up with a decision about the Syrian delegations and the group of this conference’s participants,” Lavrov said. “Nothing is possible without this.”

The new talks are meant to include both the fiercest rebels and members of the regime — a difficulty considering some opposition members’ refusal to recognize Assad as a negotiating partner.

Moscow is also calling for the inclusion on this occasion of its trading partner Iran and U.S. ally Saudi Arabia as a counterweight.

U.S. President Barack Obama said Thursday that he will continue to press for Assad’s ouster even if this is no longer a a precondition of the Geneva talks — a point that Russia insisted on adamantly.

“We both agree that Assad needs to go,” Obama said after meeting in Washington on Thursday with Turkish Prime Minister Recep Tayyip Erdogan.

“He needs to transfer power to a transitional body. That is the only way we’re going to resolve this crisis.”

The Geneva talks were agreed during a May 7 visit to Moscow by U.S. Secretary of State John Kerry and are seen as a joint peace push by the two former Cold War rivals some 26 months into the Syrian war.

But Obama has admitted that some mistrust lingers between Moscow and Washington and the world community remains particularly concerned by Russia’s arms deliveries to Syria — Assad’s most powerful ally.

Israeli Prime Minister Benjamin Netanyahu urged Putin in Sochi on Tuesday not to follow through with Russia’s reported decision to ship powerful S-300 surface-to-air missiles that can take out fighter jets.

The New York Times reported for its part on Friday that Russia has also sent the regime a new batch of upgraded Yakhont anti-ship missile systems that make a shipping embargo of Syria much more difficult to enforce.

Lavrov said on Friday that Moscow did not understand the international uproar created by its continuing arms supplies to Assad.

“I do not understand why the media is trying to create a sensation out of this,” he said.

Lavrov argued that Russia only supplied defensive weapons that could not alter the outcome of a conflict that a Syrian observers group said has claimed nearly 95,000 lives.

“This does not in any way alter the balance of forces in this region or give any advantage in the fight against the opposition,” Lavrov stressed.

Ban and Lavrov said they also discussed the suspected use of chemical weapons and Syria’s refusal up to this stage to allow U.N. weapons inspectors on the ground.

Russia has been reluctant to accept arguments that the regime was responsible for the nerve agents’ use. Yet Lavrov said on Friday that he had received Damascus’s assurance that progress on the issue of open U.N. access could be achieved soon.

The regime has thus far wanted to limit the inspection to one site near the northern city of Aleppo where rebels are accused of having used the chemical arms themselves.

“As far as we know, the Syrian government — we are working with it, on this subject included — has expressed a readiness, after there is an inspection of this place near Aleppo, to examine requests for inspections in other parts of Syria,” Lavrov said.

Ban for his part stressed that it was “very important” an investigation was conducted into the chemical weapons claims.

He added that a U.N. team could be ready to enter Syria within “24-48 hours” of having received permission from Assad.