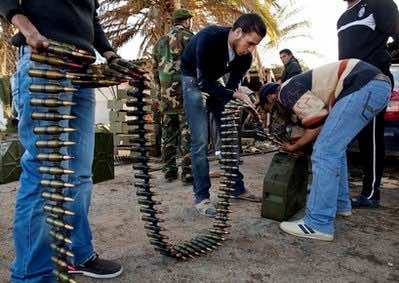 A bomb exploded Saturday in a Tripoli street housing the Algerian, Greek and Saudi embassies, lightly damaging a car, hours after a soldier was wounded in a bombing in Libya’s second city Benghazi.

A security source said the homemade bomb, locally known as “gelatina”, had been placed near a car on a street in the central district of Dahra where the three embassies are located.

The car, parked outside the Greek embassy, was slightly damaged and there were no reports of casualties.

On April 23, a car bomb detonated outside the French embassy in the upmarket Gargaresh area of Tripoli, causing extensive damage and wounding two embassy guards and several local residents.

Meanwhile a pre-dawn drive-by bomb attack in the eastern city of Benghazi on Saturday slightly wounded a soldier.

“A bomb was thrown from a car at an army checkpoint at the Dubail crossroads in the centre of Benghazi,” a security official said, speaking on condition of anonymity.

“The attack was carried out at around 2 am (2400 GMT Thursday),” the official said, adding that the identity of the assailants was not known.

Benghazi, cradle of the 2011 uprising against former dictator Moammar Gadhafi, has seen a spate of attacks on security forces and Western interests in recent months.

The latest bombings highlight the inability of authorities to establish effective security in Libya, which has been awash since the uprising with weapons used by former rebels and other groups who helped topple Gadhafi’s regime.

The attacks, which are not claimed, are usually blamed on radical Islamists, such as the group which raided the US consulate in Benghazi last September 11 killing four Americans including ambassador Chris Stevens.