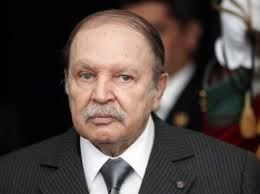 The Algerian president’s health is in decline!

Information given on Friday by the website of the French weekly Le Point.fr revealed that the health condition of Algerian president Abdelaziz Bouteflika is alarming.

Medical sources familiar with the situation affirmed to the French website that “some of the president’s vital functions are very affected.”

The recent information about the health of Algeria’s leader contradicted the official version of the story that according to which the president was sent to the military hospital of Paris because of a minor suffering from Transient Ischemic Attack also known as TIA.

Bouteflika, 76, spent already three weeks of hospitalization in Paris on grounds of an inconsequential illness as the official story stated, but the Algerian public opinion demanded more transparency on the subject, especially after the media blackout since the Algerian president was transferred to Paris three weeks ago.

Observers questioned the veracity of the diagnosis given by the presidency of the Republic and the president’s personal medical supervisor, Professor Rachid Bougherbal, who said that the president will remain in France only for few days until his recovery.

Few days turned out to be three weeks and counting, which prompts many Algerians to believe that their president suffers from a serious illness, and not only a health complaint with no irreversible complications.

The media blackout around the subject led to numerous rumors about the death of Bouteflika which circulated throughout the social networks in recent days.

Bouteflika’s health conditions began since 2005 and gave rise to speculations about the future of Algeria and who’s going to be in charge after his potential departure.