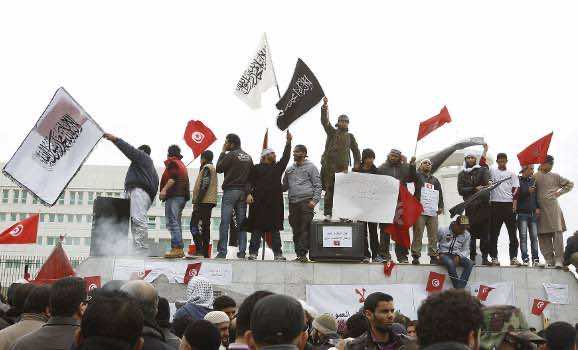 A top Al-Qaeda leader urged Tunisian Salafists to avoid falling to government provocations in order to retain public support, as clashes erupted between them and police, SITE Intelligence said Sunday.

“Don’t you ever be provoked by the regime and its barbarism to do rash acts that might spoil your blessed popular embrace,” said Abu Yahya al-Shanqiti, a member of the Sharia Committee of Al-Qaeda in the Islamic Maghreb (AQIM),  according to SITE monitoring service.

In a message on AQIM’s Twitter account, he praised “beloved” Ansar al-Sharia, the Salafist movement in Tunisia, and called on the group to continue its “good steps that bore fruits,” the US-based SITE said.

“So, be people of wisdom and patience,” he said in the message dated Saturday.

On Sunday, members of Ansar al-Sharia clashed with police in the Tunis suburb of Ettadhamen, and in the historic city of Kairouan, south of Tunis, where an annual congress for the Islamist group was due to take place before it was banned on security grounds.

Hundreds of Salafists erected barricades and hurled rocks at police, which responded with tear gas.

Tunisia has been rocked by attacks blamed on militant Islamists since the uprising that toppled president Zine El Abidine Ben Ali, and Ansar al-Sharia is considered the most radical of the extremist groups that emerged after the 2011 revolution.

The government, led by moderate Islamist party Ennahda, has hardened its stance towards the extremists in recent months, announcing in early May that two groups the army is pursuing in the western region bordering Algeria are linked to Al-Qaeda.