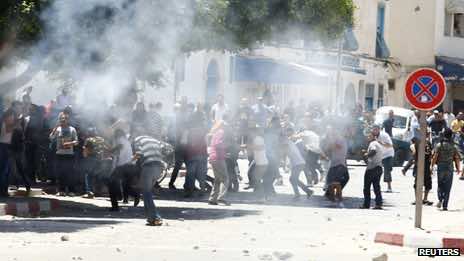 Clashes between police and Salafist protesters in a Tunis suburb on Sunday injured at least 14 people, including 11 policemen, the interior ministry said in a statement, AFP reported.

“During the protests, 11 members of the security forces were wounded, one of them seriously, and three protesters were also wounded,” it said, adding that one Islamist protester was also in serious condition.

The clashes erupted after the Salafist movement Ansar al-Sharia told its followers to gather near the capital for its annual congress in defiance of a government ban.

The ministry gave no details about the injuries, nor did it say how many protesters were arrested. Earlier a security officer said five policemen had been wounded and taken to hospital.

Hundred of Salafists had erected barricades in the streets of Ettadhamen, a poor suburb just west of Tunis, and hurled rocks at police who responded with tear gas, an AFP journalist reported.

Later in the afternoon the Salafists threw petrol bombs at the police, the reporter said, adding that the clashes then spread from Ettadhamen to the nearby district of Intilaka.

The security forces used armoured cars and bulldozers to destroy the barricades and gain access to Ettadhamen, which is considered a stronghold of the Salafist movement in conflict with the government.
Ansar al-Sharia had announced its decision to hold its congress in the Tunis suburb after a massive security deployment in the central city of Kairouan, the country’s religious capital, to prevent the group meeting there as originally planned.