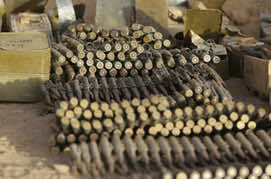 An Algerian court sentenced 14 Malian members of the National Movement for the Liberation of Azawad (MNLA) to 20 years’ jail for arms smuggling and entering the country illegally, El Khabar daily reported Monday.

The Malians, who were sentenced on Sunday by the criminal court in the southern town of Ouargla, were accused of entering Algeria illegally with a shipment of weapons from Libya, the Arabic-language daily said.

Security forces arrested the group in the southeastern town of Djanet in January 2012 at the beginning of the war in Mali.

The accused were crossing the border into Algeria from Niger with four SUVs packed with weapons, the daily said.

Algeria’s defence ministry announced on January 5, 2012 that it had intercepted “a convoy made up of four all-terrain vehicles carrying individuals from African countries who were trying to bring a shipment of weapons and munitions into Algeria.”

The MNLA, a Tuareg separatist group, launched an offensive in northern Mali in January 2012 along with militant Islamists, but Al-Qaeda-linked rebels ousted the MNLA and took control of the region.

In January, Tuareg separatists came out in support of French military intervention in northern Mali aimed at halting the Islamists’ advance on the south and reclaiming the north with troops from Mali and other African countries.