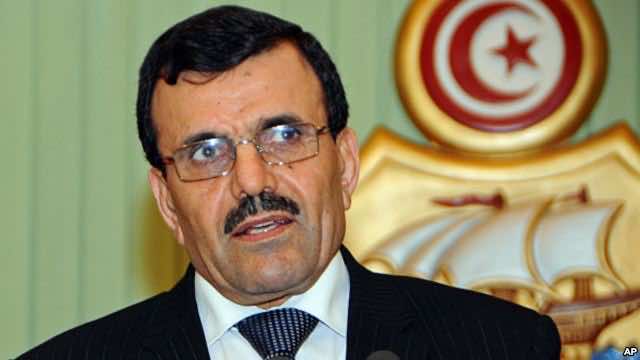 But the group’s fugitive leader Abu Iyadh insisted, in a message posted online, that his followers could not be defeated despite their “persecution.”

Tunisia has been rocked by waves of violence blamed on militant extremists since the January 2011 revolution, and Larayedh reacted angrily to the latest unrest, in which at least one protester was killed and 15 police hurt.

He said 200 members of Ansar Al-Sharia had been arrested and vowed firm action against the movement considered close to Al-Qaeda and which he linked for the first time to “terrorism.”

“This group is engaged in violence, is opposed to the state and revolts” against the authorities, Larayedh was quoted as saying on Monday by Arabic daily Al-Hayat, while on a visit to Doha.

In response, “we will deal with extremism firmly, we will be rigid,” added the former interior minister and stalwart of the ruling Islamist party Ennahda.

But Ansar Al-Sharia’s leader, a former Al-Qaeda fighter in Afghanistan whose real name is Saif Allah Bin Hussein, was defiant in his five-minute message, apparently taped before Sunday’s violence.

“God knows well that I would like to have been with you at the moment when you opened a shining page in the history of our nation. You have shown the entire world that your efforts cannot be defeated despite the persecution of your leaders,” he said.

The audio recording was posted on the group’s Facebook page.

Abu Iyadh has been on the run since September, after an attack by protesters on the US embassy in Tunis, which he is accused of orchestrating and which left four assailants dead.

The group members’ third annual congress was to be held on Sunday in the holy city of Kairouan.

But the government banned the gathering, saying it posed “a threat to public order,” and deployed a heavy security contingent in Kairouan, prompting Ansar Al-Sharia members to gather in the Tunis suburb of Ettadhamen where Sunday’s fighting erupted.

A hospital official in Tunis said one protester died of gunshot wounds and the interior ministry confirmed the death, saying in addition three protesters and 15 policeman had been wounded.

Ennahda, Tunisia’s moderate Islamist party, has been sharply criticized for failing to prevent Islamist-linked unrest in Tunisia since the uprising that toppled Zine El Abidine Ben Ali, and of being too lenient.

But it has hardened its stance since early May, faced with the threat of two armed jihadist groups being hunted along the Algerian border.

“Our religion has taught us to thank the deserving, and you tyrants are the best placed to be thanked as you have committed so many stupidities which have allowed us to spread our teaching without needing publicity.”

Ansar Al-Sharia is considered the most radical of the extremist groups that have emerged in Tunisia since the January 2011 revolution.