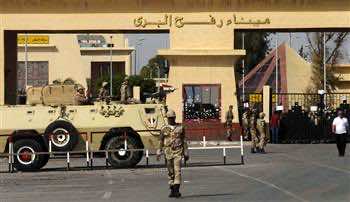 Egypt sent police reinforcements to the Sinai after an attack on a police camp on Monday in the wake of the kidnapping of seven security personnel in the lawless peninsula, officials said.

According to one security official, 80 Central Security (riot police) units and 26 armoured personnel carriers were deployed in north Sinai.

The deployment comes hours after a police camp came under fire with heavy weapons in a dawn attack that further heightened tensions in the peninsula after last week’s kidnapping of three policemen and four soldiers, a security official said.

The official, quoted by state news agency MENA, said assailants opened fire “for 25 minutes using heavy weapons” against El-Ahrash camp in the north of the Sinai Peninsula, without reporting casualties.

“Personnel in charge of camp security managed to repel the attack and forced the armed men to flee,” he said, adding that a hunt was underway.

On Sunday, President Mohamed Morsi ruled out negotiating with the kidnappers of three policemen and four soldiers who appeared to plead for their release in an online video, although the security official said no order had been received to launch a rescue operation.

The abductions last Thursday in the Sinai prompted angry police to shut down border crossings with Gaza and Israel.
A video posted on YouTube earlier on Sunday appeared to show the seven hostages, blindfolded and with their hands on their heads, identifying themselves.

One of them is prodded by what appears to be a rifle held by an abductor offscreen before another hostage says the kidnappers want the release of detained Bedouin “political activists”.

The video was later removed from YouTube, which posted a message saying it violated its “policy on violence”.

The policemen, who worked at border crossings, and soldiers were kidnapped at gunpoint while travelling to their homes on leave.

Several police stations in Sinai have gone on strike to protest against the abduction and in solidarity with colleagues who have closed the Rafah border with Gaza and the Oja crossing with Israel, MENA said.

Attacks on police and soldiers in the sparsely populated peninsula have surged since an uprising that overthrow president Hosni Mubarak in 2011, as have cross-border attacks on Israel.