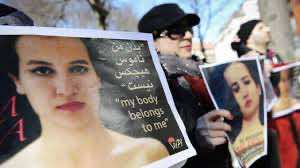 A young Tunisian activist who sparked controversy in March by posting topless pictures of herself online has been arrested for allegedly making “immoral gestures,” the interior ministry said on Monday.

“The young girl was placed under arrest yesterday [Sunday] in Kairouan… because of immoral gestures,” ministry spokesman Mohamed Ali Aroui told a news conference, without elaborating.

“Our society is Muslim and we do not accept this marginal behavior,” he said.

In videos posted on the Internet, the activist known by the pseudonym of Amina Tyler was in Kairouan where Salafist group Ansar al-Sharia was to have held a congress on Sunday that was prevented by security forces.

The teenager is seen having painted the word “Femen” on a wall near the mosque which was to have been the venue for the gathering.

In a country where hardline Muslims have become increasingly active since its January 2011 revolution, her actions have been in support of Ukrainian women’s topless protest group Femen.

The 18-year-old sparked both scandal and a wave of online solidarity after she was threatened by Salafists for posting pictures of herself on Facebook, bare-breasted.

The interior ministry did not specify what charges if any were being brought against Tyler, but offences against morality can be punished by six months in prison under Tunisian law.