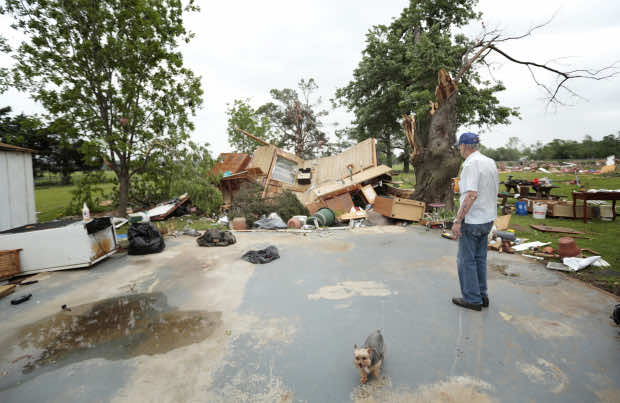 A powerful tornado swept through an Oklahoma City suburb on Monday, tearing down blocks of homes, two schools and leaving at least 91 people dead, including 20 children, local officials said.

The state medical examiner’s office released the latest death toll but the number was climbing rapidly, as emergency crews combed through smashed homes and the collapsed remains of an elementary school in Moore, Oklahoma.

“We’ve had a massive tornado, a huge one that has passed through this community,” Oklahoma’s Governor Mary Fallin told a news conference. 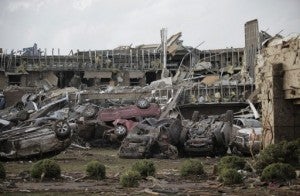 Flipped vehicles are piled up outside the heavily damaged Moore Medical Center after a powerful tornado ripped through the area on May 20, 2013 in Moore, Oklahoma. AFP

“We know there are a lot of injuries. We know we’ve lost a tremendous amount of structures throughout this community and throughout the state,” she said, as the Moore police chief urged people to leave the area.

“There are a lot of safety issues, gas lines, power lines, things of that nature, that we have to take into consideration and there’s just not much else that can be done there at this time,” police chief Jerry Sillings said.

The dead included at least 20 children, most of them under the age of 12, Amy Elliott, of the state medical examiner’s office, told AFP. She later told CNN in a televised interview that the total death toll had risen to 91.

CNN reported that at least 145 people had been hospitalized.

Reporters for local broadcaster KFOR-TV saw children as young as nine being pulled out of the Plaza Towers Elementary School in Moore, a residential community of 55,000 just south of Oklahoma’s state capital.

Anxious parents were being kept at a distance while search-and-rescue workers scrambled to free the students.

A second elementary school, Briarwood, was also hit but did not appear to have sustained casualties.

From its news helicopter, KFOR’s cameras captured scenes of widespread destruction, with street after street of single-story homes in Moore stripped of their roofs and cars piled atop each other like toys.

Utility lines were down and gas lines exposed, triggering localized fires. The Moore Medical Center was evacuated after it sustained damage, and state authorities called out the National Guard to help rescue efforts.

On Twitter, the National Weather Service gave the tornado a preliminary rating of EF-4, indicating that it packed winds of 166 to 200 miles per hour (267-322 km/h) — more severe than a category five hurricane.

In downtown Oklahoma City, tornado sirens went off at least three times and the Interstate 35 highway — a busy north-south artery through the American heartland — was closed to all but emergency vehicles.

In Moore, live images from KFOR showed people wandering among the debris and even a couple of untethered horses from a local stable that somehow managed to survive the punishing storm.

“I had no idea it was coming,” said a stable worker, who told how he survived the “unbearably loud” twister by taking cover in one of the stalls.

Monday’s tornado followed roughly the same track as a May 1999 twister that killed 44 people, injured hundreds more and destroyed thousands of homes.

Because of the hard ground, few homes are built with basements or storm shelters in which residents can take cover.

On Sunday, a powerful storm system churning through the US Midwest spawned tornadoes in Iowa, Kansas and Oklahoma, destroying homes and killing at least two people, US media reported.

Fallin had already declared a state of emergency for 16 Oklahoma counties due to the tornado threat on Sunday, and added five more on Monday after the storms hit her capital.

In Washington, a White House official said Obama was getting regular updates and that the Federal Emergency Management Agency (FEMA) stood ready to provide assistance.

“The administration continues to urge all those in affected or potentially affected areas to follow the direction of state and local officials as this severe weather continues,” the official added.