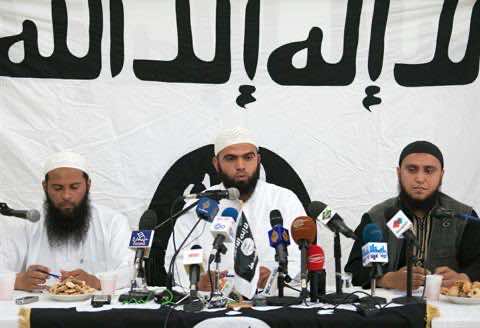 Radical Salafist group Ansar al-Sharia, which Tunisian authorities have branded a terrorist organization, has called for a protest in the city of Kairouan on Friday against the arrest of its spokesman.

“Call to all Muslims to a protest in support of Ansar al-Sharia’s spokesman Seifeddine Rais, in front of the headquarters of ruling Islamist party Ennahda near Bab Jalladine” in Kairouan, the group said on its Facebook page.

Rais was arrested on Sunday in the city south of Tunis where the Salafist group was to have held a congress the same day that was banned by the authorities.

The interior ministry has not stated the reason for the spokesman’s arrest, carried out at dawn as he was jogging in Kairouan.

“The law will be applied when a person fails to respect the law,” was all the ministry’s spokesman Mohamed Ali Aroui would say, contacted by AFP for comment.

In response to the ban, and a heavy deployment of security forces in Kairouan to prevent them from gathering there, Ansar al-Sharia told its members to rally instead last Sunday in the poor Tunis suburb of Ettadhamen, a Salafist stronghold.

Clashes ensued between the police and the hardline Islamists, in which at least one person was killed and 18 people wounded, including 15 policemen.

The Salafists, who advocate an ultra-conservative brand of Sunni Islam, were initially tolerated by the authorities following Tunisia’s January 2011 revolution, even as a wave of violence linked to the extremists swept the country.

The attacks have targeted art galleries, cultural festivals and Sufi shrines, and culminated last September in an assault on the US embassy that left four Islamists dead.

But faced with the threat of Al-Qaeda-linked jihadist groups along its western border, the government has since hardened its stance towards Ansar al-Sharia, considered the most radical of the extremist groups to have emerged since the revolution.