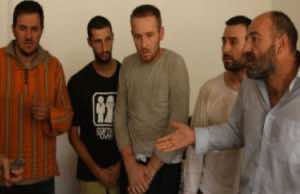 Five Serbs arrested in Libya in August 2011 on suspicion of fighting for the late dictator Moamer Kadhafi have been freed and arrived Tuesday in Belgrade, national broadcaster RTS reported.

The five, who had said they were working on road construction in the north African state, were arrested by anti-Kadhafi forces at Tripoli airport during the uprising that eventually toppled Kadhafi.

They were accused of being mercenaries and were held in detention in the northwestern town of Zintan, RTS said.

Zoran Nikolic, one of the detained Serbs, told RTS they had been released thanks to the Serbian authorities’ assistance.

Serbia’s Deputy Prime Minister Aleksandar Vucic, who welcomed the group upon the arrival, said the liberation operation, which lasted a year, was “difficult.”

Following the uprising backed by a NATO no-fly zone, Kadhafi’s regime was toppled and he himself was killed in October 2011.