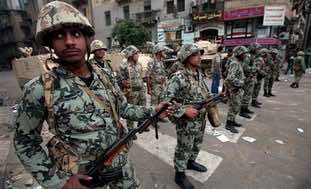 A senior interior ministry official told AFP a “campaign has been going on for half an hour”, while a policeman taking part in the operation told AFP that security forces traded fire with gunmen in a village in the restive peninsula.

The operations were part of a large security sweep and not a rescue attempt, said the interior ministry official.

Prime Minister Hisham Qandil said there were “intense efforts on all fronts for the return of the captured conscripts safely,” the official MENA news agency reported.

He said there were no negotiations with the kidnappers, who demand the release of jailed Bedouin militants, but tribal leaders have asked for some time to persuade the gunmen to release the hostages.

“Security forces have not decided on the zero hour to carry out an armed operation to release the (military and police) conscripts until pinpointing their location,” the minister told MENA.

“Especially after it has been confirmed that the kidnappers possess SAM 7 missiles and anti-tank rockets,” he said.

Witnesses in Sinai told AFP there was increased military movement in the peninsula, as a military helicopter circled above.

Authorities have also raised the state of alert in hospitals and emergency services, MENA reported.

On Monday, the presidency said all options were on the table to secure the men’s release.

The seven were abducted at gunpoint on Thursday as they were returning from leave.

The presidency said it was not negotiating with the kidnappers, but did not rule out future talks.

“The presidency did not negotiate with criminals,” spokesman Omar Amer told reporters.

That was followed by another attack, on the Oja border crossing with Israel, which is also close to a police camp.

Attacks on police and soldiers in the sparsely populated peninsula have surged since an uprising overthrew president Hosni Mubarak in 2011, as have cross-border attacks on Israel.