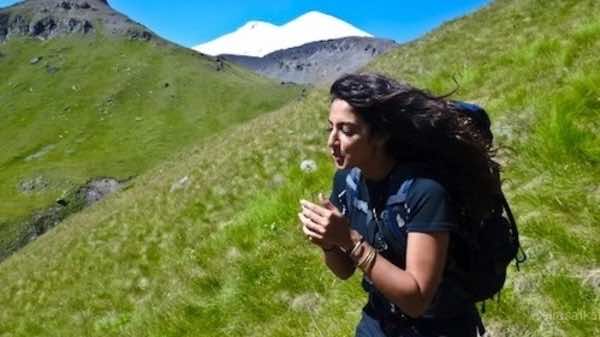 The first woman from Saudi Arabia to scale Mount Everest said she doesn’t intend to inspire a movement, but would be happy to change people’s opinions of Saudi women and Saudi women’s opinions of themselves.

Raha Mobarak told reporters in Katmandu on Tuesday after returning from the mountain that her next goal is to climb the highest peaks in all seven continents. She said she has already scaled five of them.

Mobarak, 27, was among hundreds of climbers who reached Everest’s 8,850-meter (29,035-foot) summit in recent days because of favorable weather conditions on the mountain.

“It was very personal thing. I didn’t do it to cause a movement, did not do it because of anything, but If I can change people’s opinion or the world’s opinion on Saudi women and if I can change Saudi women’s opinion about themselves I would be really happy,” Mobarak said.

Women’s freedoms are severely limited in Saudi Arabia. Females are not allowed to drive and cannot travel or attend school without the permission of a male guardian.

Last year, two Saudi female athletes made an unprecedented appearance at the Olympics.

Mobarak said she didn’t have any problems during the climb. She was among the first batch of climbers to head to the summit and there were fewer people on the narrow trail on the day she and her teammates reached the summit.

“I am very lucky that I adapted to the altitude well but it was really hard for me to get used to the cold, I come from Saudi Arabia,” she said.

She said she began climbing by scaling Mount Kilimanjaro in Africa nearly two years ago and set her sights on Everest “simply because someone said I couldn’t do it and I wanted to prove to myself.”

“It wasn’t a prefect day on the summit, it was windy but it was beautiful,” she said. “I was standing on the summit of the world with my two feet and I could not believe it.”