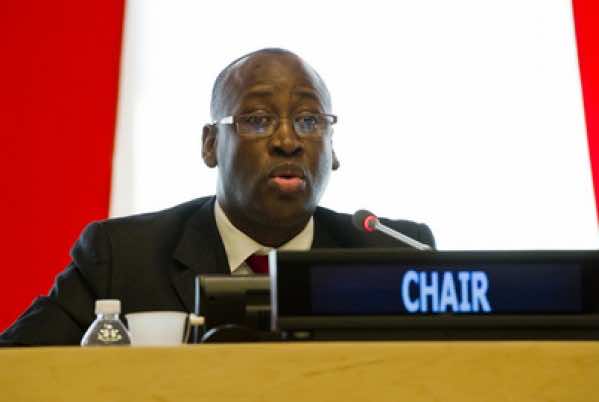 The Permanent Representative of Senegal to the United Nations on Monday praised, at United Nations Headquarters in New York, the “leading and pivotal” role played by Morocco in support of the Palestinian cause and the defense of the holy places in the occupied Palestinian territory.

Mr. Abdou Salam Dialo, Ambassador of Senegal, who is also the Chairman of the Committee on the Exercise of the Inalienable Rights of the Palestinian People, stressed the central role played by the Al Quds Committee, which is chaired by King Mohammed VI, to preserve the Islamic character of the Holy City, and in providing assistance to the Palestinian people in their struggle against the Israeli occupation .

He also leveled criticism towards every person who “calls into question the role played by Morocco and King Mohammed VI in support of the Palestinian cause”, in a tacit message to the leading figure of the Muslim Brotherhood, Mr. Essam el-Erian, who criticized last week the “weak” role of the Al Quds Committee, when he said that “it did not bring anything for the Palestinian cause.”

Senegal’s envoy to the UN went to say that “no other country plays a more important role than Morocco in the defense of the Palestinian cause, the preservation of the religious and cultural heritage of the city of Jerusalem and in supporting the steadfastness of its people against all attempts aimed at its judaization,” adding that the defense of the Palestinian cause “constitutes one of the pillars of Morocco’s foreign policy.”

Mr. Dialo expressed his gratitude, on behalf of the Palestinian people and the United Nations Committee- to King Mohammed VI and Morocco for the efforts they have been exerting to stand by the Palestinian people in their struggle to achieve their inalienable right to establish their independent state, with East Jerusalem as its capital.

At the end of his briefing to the Committee, Mr. Erekat also praised the role played by Morocco in the defense of the religious and cultural heritage of the city of Jerusalem, and expressed his deep gratitude to King Mohammed VI.