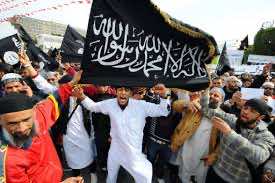 Ansar al-Sharia spokesman Seifeddine Rais, detained in the Tunisian city of Kairouan at the weekend as police enforced a
government ban on its annual congress, was released on bail on Wednesday, the Salafist group said.

“God be praised, our brother Seifeddine Rais has been freed,” the group said on its Facebook page.

He has been summoned to appear in court on Friday.

On Tuesday, Ansar al-Sharia called for demonstrations in Kairouan on Friday to demand the release of Rais, raising fears of new clashes with police like those that left one person dead and 18 injured on Sunday.

The Salafists, who advocate an ultra-conservative brand of Sunni Islam, were initially tolerated by the authorities following Tunisia’s January 2011 revolution, even as a wave of violence linked to the extremists swept the country.

The attacks have targeted art galleries, cultural festivals and Sufi shrines, and culminated last September in an assault on the US embassy that left four Islamists dead.

But faced with the threat of Al-Qaeda-linked jihadist groups along its western border, the government has since hardened its stance towards Ansar al-Sharia, considered the most radical of the extremist groups to have emerged since the revolution.