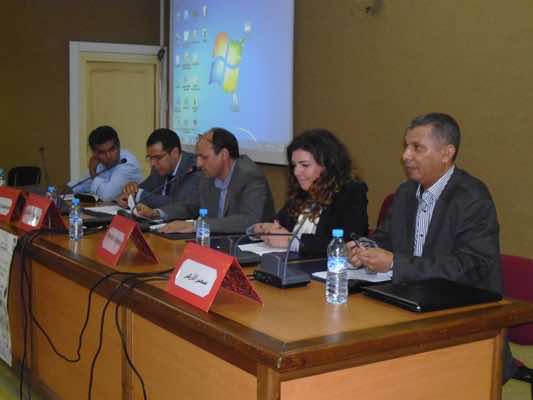 The English Department of the Ben M’sik Faculty of Letters and Humanities in Casablanca organized on Tuesday, a cultural event under the theme of “Youth, Creativity and Change.”

The on-campus theater hosting the event witnessed a large attendance, ranging from numerous academic students representing varying departments and institutions, to a group of university professors and scholars, to representatives of different cultural and educational institutions, namely the Moroccan-American Commission for Educational and Cultural exchange (MACECE), Casaelfn and Dar America (American house)

Placing students’ creativity and expression at its centre, the event’s program featured a miscellany of outstanding speeches, musical and theatrical performances, and varying dance shows.

During the event, a number of talented students representing the Ben M’sik English Department delivered an array of motivational speeches in English. Their speeches solemnized creativity and paid tribute to the most creative minds recognized in history. Some of the speeches also pinpointed the challenges faced by creative people in their society.  Others shed light on some of the negative repercussions of creative products when turned into commercial tools.

In addition to the motivational speeches, the program featured spectacular dance shows. The dance shows varied from an exotic Indian dance show, to a collaborative hip-hop performance to Michael Jackson’s Black and White. Talented singers representing the department of English also imparted their passion to an amazed audience. The leitmotifs of these songs also related to the arching theme of “youth, creativity and change,” such as aspiration, dream, faith, change, hope, and so forth.

Theatrical performances were also part of the program. Some of the remarkable theatrical plays were performed under enlightening projections, and successfully conveyed their messages to an enthusiastic audience. One of the plays, however, was intentionally performed in the dark, and relied mainly on hand torches, music, mime and external voices to convey its message to the audience.

Thanks to the devotion, enthusiasm and professionalism of its professors, and to the inexorable energy and talent of its students, the Ben M’sik English Department, through its annual cultural events, has become a model for the departments in other public institutions of higher education in Casablanca and in Morocco at large.

It is also noteworthy that Meriam Mabrouk, a student representing the same department, recently represented Morocco at the International Public Speaking Competition held in London, after ranking first in the national public speaking competition in Morocco.