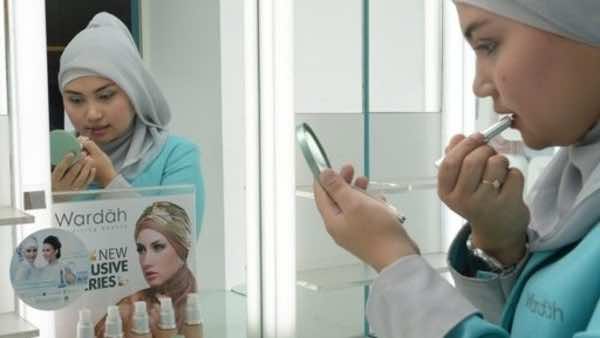 The 37-year-old, who in her 20s would save up for the latest Guess clothes and Revlon make-up, now strictly buys products that show she is a proud Indonesian Muslim – and she hopes to persuade others to do the same.

She is a member of the “Hijabers Community,” an Islamic all-women business network which is part of a Muslim consumer boom jostling for market share with Western firms keen to take advantage of Indonesia’s strong growth.

“I think Indonesia has become too Western,” said Rahmadi, who says her business has increasingly won clients who want to host Islamic events since she joined the Hijabers.

“Younger Indonesians spend most of their time hanging out at malls, and they forget to pray.”

Many now share Rahmadi’s view that persuading a new class of consumers to buy Islamic is about more than just shopping habits – it is about combating a rising tide of Western influence that threatens to erode traditional Muslim values.

They see Western consumerism as inextricably linked to a rash of imported social ills, from greater sexual promiscuity to increased alcohol consumption, and believe Islamic consumerism can be a counterweight.

Designers are increasingly coming up with clothing and jewelry with an Islamic twist, including pieces that rival high-end, imported goods from the likes of Chanel and Louis Vuitton.

In an affluent south Jakarta suburb, jewelry designer and “Hijaber” Reny Feby displays glittering $500 (385-euro) brooches that women can pin to their headscarves, and also has more expensive items such as a diamond ring for $50,000.

“Fifteen years ago, no one wanted to buy my jewelry because it was seen as too Muslim, and I used ‘proudly made in Indonesia’ as my tagline,” said the 42-year-old, wearing orange beads and an electric-blue headscarf.

“But now Indonesians are proud to buy local and Islamic fashions, and the elite who buy my pieces use them as status symbols.”

The rise in consumption is driven by the fast expansion of the middle class as Southeast Asia’s top economy booms, notching up growth of more than six percent annually in recent years.

Annual per capita income has steadily risen in Indonesia from $890 in 2003 to around $3,000 in 2011, World Bank figures show – although millions still live in abject poverty.

A shift towards conservatism

As people’s spending power grows, they are literally “consuming” their Muslim faith “in a very tangible way,” according to Greg Fealy, an Indonesia expert at Australian National University in Canberra.

“A lot of the pious Muslims in the middle class want to show to the people around them they’re living pious lifestyles – through their clothes, schools, the shopping they do and the books they read,” he said.

While there was undoubtedly already a desire for products with a Muslim flavor, groups such as the 3,000-strong Hijabers hope to increase this trend.

The nationwide organization, which takes its name from the traditional Islamic headscarf, promotes products such as Islamic jewelry and halal beauty products.

They are in the vanguard of the campaign against Western consumerism, most visible in the ubiquitous shopping malls and chains such as Starbucks.

The Hijabers protested this year against Valentine’s Day, which they believe is encouraging Muslim couples to be more physically affectionate in public.

Inspired by a Pakistani movement to rename it Hijab Day, they handed out pamphlets in several cities instructing women on covering up.

Some of the Islamic consumption clearly fits with a shift towards a more conservative form of Islam that has been growing in Indonesia since the fall of dictator Suharto in 1998.

Nevertheless, the overall picture remains complex and contradictory in a sprawling archipelago of more than 17,000 islands.

Even as more people buy Islamic products, there has also been an explosion in the popularity of “dangdut” music, an Indonesian fusion of Arabic, Malay, Indian and Western pop notorious for its lewd lyrics and raunchy dance moves.

On the other hand, people are buying up properties in an Islamic housing complex just one kilometer (0.6 miles) from a concert venue on Jakarta’s outskirts, where pop stars such as Kylie Minogue and Justin Bieber have performed sold-out shows.

The Bukit Az-Zikra complex, built around a mosque and study center funded by slain Libyan dictator Moammer Qaddafi, is a tobacco- and alcohol-free zone and those who live there must dress according to Islamic law.

It aims to “compensate for modern life, business and routines that often make people indifferent and inattentive to religious values,” according to its website.