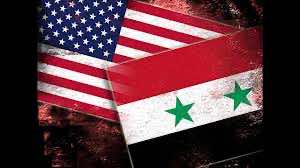 The Syrian crisis has entered its third year. There is no clear idea of what will happen next. What is known is that fighting continues every day and the number of victims rises. Syrians become refugees in neighboring countries as they flee the killing. Soon there will be a million Syrians living as refugees. Neither side knows what will come next in the battle. Nor do they have a clear idea of the country’s future.

As a Syrian activist and journalist who saw a peaceful revolution that began in my hometown of Dara transform into a violent conflict overseen by the great powers, I cannot stay silent. I also question the role that the United States is playing in the conflict in my country.

From what I see, the U.S. government is not eager for the conflict to move past its current stagnant, position. They are not eager for the rebels to win. Because neither the armed nor political opposition has been able to give them real guarantees of what will happen next. For this reason, they are not making serious efforts to stop the killing.

For years, the U.S. saw Bashar Al Assad as a fairly stable and familiar ruler in the region. With him no longer able to govern all of Syria and a huge lack of confidence in the opposition, I believe that out of a lack of other options, the U.S. has decided upon a policy of weakening Syria for the future. I do not know if this is an intentional policy or a de facto policy.

It is also important to note that while the U.S. may even have preferred Assad to the nightmare of all the unknowns presented by the opposition, it still realizes he must be let go. The U.S. has to let go of Assad in the same way they let go of Mubarak and Ben Ali. The reason for this is that the U.S bases a large part of its international legitimacy and leadership on being one of the world’s guardians of democracy and freedom. It cannot remain completely silent, but has not stepped far beyond that line.

Additionally, a weak Syria would afford Israel, the key U.S. ally in the region, a measure of protection. It would weaken Iran and Hezbollah. These U.S. interests are some of the only signs of clarity among the destruction of Syria. Unfortunately, this does not help Syrians, the majority of whom are not extremists or radicals. We are ordinary people of multiple sects and religions who want to live freely with each other and choose our leaders. We consider this a human right and we will never stop demanding it.

Generally speaking, however, the peaceful movement is still accused of being detached from reality on the ground. For many, the campaign has lost its relevance as little effort is made to connect directly with rebels. In reality, the peaceful movement’s role is undergoing a fundamental change: its goal has evolved from toppling the regime through peaceful means to monitoring the revolution and defining the right path it should follow. By denouncing the human rights violations committed by the regime and the rebels, peaceful activists are keeping the revolution sane.

Another aspect that I want to bring attention to is how the U.S. is only recognizing one part of the political opposition among Syrians. This is currently the Syrian National Coalition. However, there are others, and they are known to Washington.

During their visit, they presented a working paper called the “Democratic Alliance to Resolve the Crisis in Syria.” This relies on the international Geneva Convention as its framework to advocate a mutually acceptable negotiated settlement that calls on all parties to stop the bloodshed and form a transitional government whose mission is restoring stability to the country and starting the process of democratization and democratic institution-building. This includes transparent elections for a legislative council and  a constitute assembly.

“You can’t solve the problem militarily,” Dr. Manna said when he was in the U.S. “We have to ask ourselves what we have after two years? Nothing, except more murder, more starvation, more crimes against humanity.”

Critically, this plan calls for the involvement of all actors in the conflict, including Russia and China, to be involved in this process.

However, the coalition’s insistence on pursuing a military solution to the conflict, by not adequately engaging with all the actors in the conflict, shows its political naivety and also its distance from the uprising’s roots. They insist that Russia and China should not be involved. But these powers should be more involved because they have the power to put pressure on Assad and make him leave power. If the US cooperates more with other opposition parties, such as the Committee, and takes into account more of their ideas, the conflict has a greater chance to achieve a political solution. The powers controlling the conflict, along with the Syrians, must engage in stronger dialogue to end it.

However, the coalition is the only opposition force that has the attention of the U.S. and its allies in the Gulf. Many activists remain separate from it. Farah Naïf, a 26-year-old activist from the eastern province of DeirEzZour, said that focusing on a military approach to battling the regime would not work. She also has little faith that the coalition’s promise to form a transitional government will make any real difference on the ground because the same opposition members have been involved in the process for the past two years and they have given nothing to the Syrian people. Naïf believes the entire uprising will go on for longer and Syrians will eventually turn back to peaceful means to gain our freedom from the regime after violence fails to obtain a lasting change.

as Also, as we saw with the other Arab regime, violence eventually comes back to harm the instigator.

Today, when I speak with most activists and ordinary people in Syria, the mood has soured on specific countries, such as Qatar, Saudi Arabia, and Turkey because they are providing weapons and trying to run the revolution for their own political fortune. They have no problem with the devastation. The fact that the U.S. left the provision of weapons for the rebels to these countries was a terrible mistake that allowed extremist groups to flourish.

Syria is on course to becoming a more fruitful breeding ground for jihadist fighters than Afghanistan or Iraq.

The situation in Syria today has a number of characteristics that need to be taken into consideration when studying the dynamics of the uprising, both now and in the future.

This attitude, anger, and  sense of betrayal, is spreading through the country. It is as if the lives of thousands of brave Syrians are being wasted for an international game.