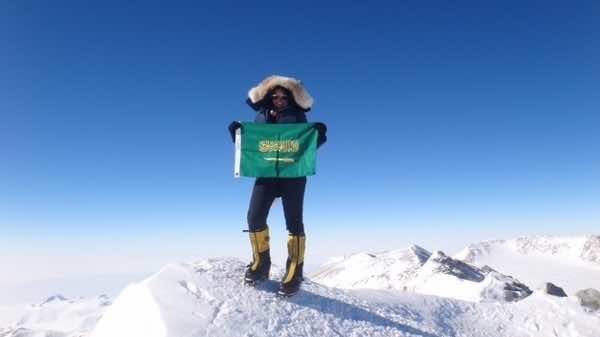 She stirred a media storm in the last week, becoming the first Saudi woman to climb the highest peak in the world, and the youngest Arab to do so.

“I felt relieved once I was done with the climb,” said the freelance art director. “It was something I’ve always wanted to do. That mountain was calling me. I felt it was a challenge.”

However, she expressed surprise at all the media attention.

“It was a total, personal, little demon I had in my head for years, and then it just exploded,” she said. “I came down from the mountain [on Tuesday], and my phone hasn’t stopped ringing.”

The 27-year-old had been training for almost a year and a half by climbing eight different mountains around the world before reaching the highest peak, which took about two months.

“It was all support from them [family and friends]. They’re my strength, they’re my allies.” Moharrak said.

“My parents have been the greatest inspiration. They taught me to dream big and live bigger. They taught me that the limits we have are the ones we set for ourselves, and I owe everything to them.”

Moharrak, who lives between Dubai and Saudi Arabia, said she is proud to be an inspiration to young women everywhere, in particular the Arab world.

“If me being this person now can inspire a new generation of women, please do and come take [the world record] from me,” she said.

“Unfortunately, our culture in the Gulf puts this box that you’re supposed to fit in. If you don’t fit in, then you’re doing something wrong.

“I’m not doing anything that insults my culture, am I? You don’t have to be a rebel, you don’t have to fight and hurt the people you love, and break away from culture to do something great.”

Moharrak’s remarks followed reports that her latest achievement has been a great step forward for women’s rights.

Moharrak stressed that Arab women are stronger than how they are portrayed in both the Arab and Western worlds, saying everyone should “challenge” themselves.

“How would you know what you’re capable of if you don’t try?” she asked. “Arab women aren’t weak. We’re not what we’re portrayed in the media… I worked hard, and I made myself survive.”

When asked about what her plans are next, she replied: “You’re talking to a girl who a year and a half ago had never climbed a mountain, and then almost 18 months later I was standing on top of the world. The best answer I can give is: ask me in a year.”

However, she expressed her intention to climb two more mountains, Denali in Alaska and Carstenz in Australia. Once accomplished, she would have climbed the Seven Summits, the highest mountains of each of the seven continents.

“How would you know what you’re capable of if you don’t try? I never thought in a million years I could stand on top of the world.”