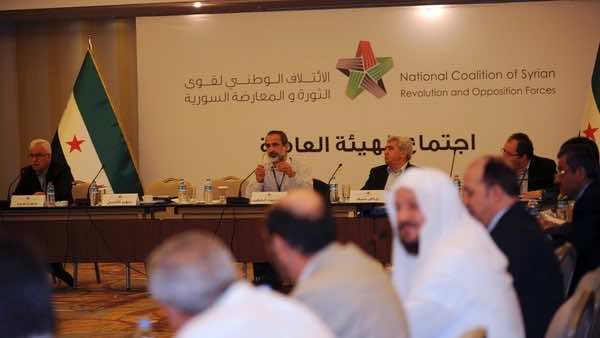 Syria’s main opposition group is set to hold a second day of talks Friday, mulling a new U.S.-Russian peace initiative to end the two-year civil war while the regime vows to crush the insurgency.

Holding its seventh general assembly meeting since its creation last November, the National Coalition is expected to choose a new president, incorporate new members and decide the fate of an interim rebel government.

The three-day meeting comes as rebels face a massive onslaught by President Bashar al-Assad’s forces and the Lebanese Shiite movement Hezbollah in the insurgent bastion of Qusayr, central Syria.

Since the Syrian conflict erupted in March 2011, more than 90,000 people have been killed.

The opponents’ meeting began in Istanbul Thursday after backers of the anti-Assad uprising pledged more assistance to the opposition should the regime fail to commit to a peaceful political transition.

The Friends of Syria group, meeting in Amman, also tried to agree the contours of a peace conference to end the war.

The opposition has long held that it can only enter into talks if the fall of Assad’s regime is guaranteed.

While Assad has repeatedly said the Syrian war must end with a political solution, state news agency SANA hinted Thursday the regime may defy the joint U.S.-Russian push for peace.

“Participants [in the Amman meeting] have blocked the road towards the holding of an international conference” for peace, said SANA, in reference to the meeting dubbed Geneva 2.

Also on Thursday, Assad reportedly told a Tunisian delegation he was determined to crush the rebellion “and those who support it regionally and globally,” SANA said.

The opposition’s ambassador in France Monzer Makhous said SANA’s dismissal of the Friends of Syria meet was “a sign” that the regime may reject the Geneva 2 proposal.

“It is not an official refusal, but it is a sign,” Makhous told AFP.

Makhous said Geneva 2 would see the entry of a transitional government bringing together regime and opposition representatives, and that it would take over full powers in Syria for a time.

“Bashar [al-Assad] would be out of the equation, and the transitional government would be in charge of the security and military files.

“Anyone capable of analysis can see that the Syrian regime would not accept this equation, though it is the least the opposition is willing to accept,” Makhous said.

“We don’t have a list of attendees, we don’t know what countries are going to attend, what’s the agenda, what’s being proposed, what are the final goals,” Coalition spokesman Khaled al-Saleh told reporters.

Another Coalition member told AFP on condition of anonymity the Geneva 2 proposal “is the same piece of hashish the international community gives us every time. They lure us into thinking the end is nigh, and then it just continues.”

With a vast onslaught on Qusayr leaving scores dead in the past week, Assad appears as far as ever from giving up.

While opponents in Istanbul praised rebels for holding out, the Syrian Observatory for Human Rights said troops loyal to Assad were advancing in their offensive on Qusayr, which is strategically located near Lebanon and the road linking Damascus to the coast.

The group also reported more than 100 Hezbollah fighters killed in Syria since last autumn, though a source close to the militant group said the actual toll was 75.

The fighting has spilled over into Lebanon, where a fresh round of sectarian, Syria-related clashes in the northern city of Tripoli killed nine people on Thursday alone.

Damascus dominated Lebanon politically and militarily for 30 years, and still exerts considerable influence through its allies over the small Mediterranean country.

“What matters to us most is selecting somebody who will be able to face the massacres that Assad is committing on a daily basis,” he told reporters.

The opposition also will try to establish a rebel government under interim Prime Minister Ghassan Hitto, while discussing the group’s expansion to include 31 new members, Saleh added.