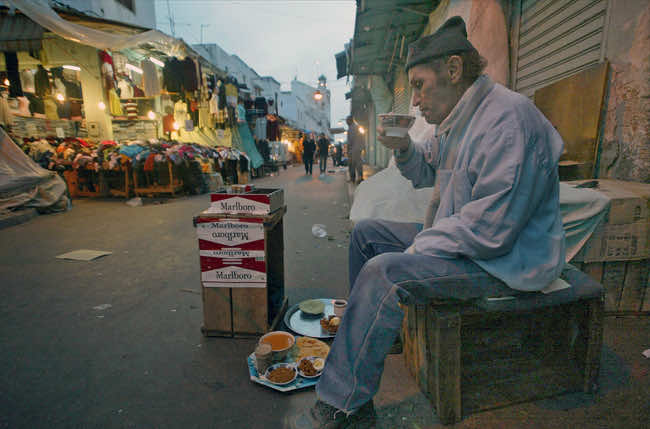 Moroccan authorities are once again cracking down on street vendors.

In desperation, many of these itinerant merchants have begun emulating Tunisian cart operator Mohamed Bouazizi, whose self-immolation launched the Arab Spring.

The latest fatality is Mbarek Elkarrassi. The young man died a week ago after setting himself alight in Marrakech.

Local authorities confiscated his cart loaded with old furniture he sold for a living,” the Moroccan Association for Human Rights (AMDH) representative in Marrakech told AFP on Tuesday (May 14th).

“This is the sense of injustice that led him to attempt to sacrifice,” Mohammed Ghelloussi added. Street vendors can be found all over, from working-class districts in outlying towns to the city centres in Rabat and Casablanca. For these Moroccan street traders, selling their fish, vegetables, fruit, clothes and other wares on the ground or from handcarts, life is far from easy.

“Despite their terrible situation, street traders should refrain from doing themselves any harm,” said student Fatiha Sibara. “Those who have sacrificed themselves have left behind families who are shocked and overcome with grief.”

She also stressed that this act was forbidden in Islam.

Prime Minister Abdelilah Benkirane’s government has long spoken out against the use of self-immolation as a form of protest.

“The government made it clear that it would not give in to this kind of pressure from either street traders or the unemployed,” political analyst Jamal Farhane told Magharebia.

According to sociologist Samira Kassimi, “self-immolation is not only a sign of despair but also criticism of the authorities, who must find urgent solutions to the insecurity and the situation faced by street traders”.

In January, the government outlined a plan to address the crisis. “The issue is a priority,” Trade Minister Abdelkader Amara confirmed.

nstead of waging war against street traders, the government must restructure the sector, he noted.

A study carried out by his department found that the roughly 240,000 street vendors in Morocco’s towns and cities were the breadwinners for over 1.3 million people.

Eighty per cent of these Morocco street vendors have regular pitches at coach stations, at mosques, close to official markets or in working-class districts.

The government strategy will ensure that these traders are accommodated at city markets or itinerant stallholder markets, which will open on certain days, or within a structured street trade system, the minister said.

But until the new Morocco illegal merchant policy takes effect, vendors such as Mourad Derouichi say they intend to stay on the streets.

“The hardships of life and repeated confiscations of wares are causing traders to take leave of their senses, as it is the only way they can make a living,” Derouichi told Magharebia.

“But we have families to feed and support. They should let us go on working until they find a solution for us,” the Temara trader added.

After all, Derouichi said, “A street trader is merely an unemployed person in disguise.”