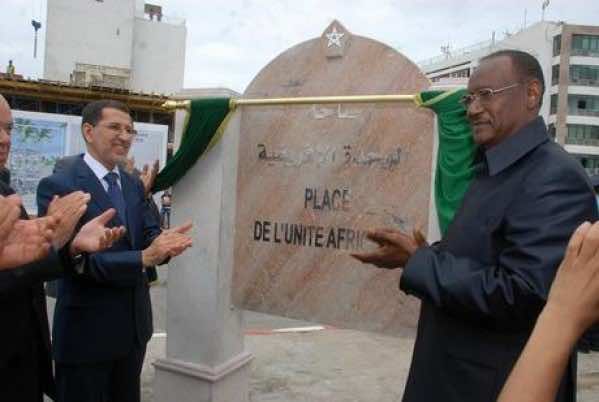 As part of celebrations of the Africa day in Morocco, marking the 50th anniversary of the Organization of African unity, a square in Rabat was named on Friday “African unity”, a token to confirm Morocco’s will to consolidate its African identity.

Dedication of African unity square in Rabat, a token of Moroccan unshakable African identity
24 May 2013

The square was dedicated at a ceremony chaired by minister of foreign affairs and cooperation, Saad Dine El Otmani and dean of the African diplomatic corps in Morocco, ambassador of the Republic of Central African, Ismaïla Nimaga.

The Moroccan official stressed that this event illustrates the resolve of Morocco, under the leadership of HM King Mohammed VI, to give a continuous and constant trait of its solidarity with Africa, promote south-south cooperation, establish peace and stability in the continent and guarantee lasting development in all African countries.

After the battle for independence, Africa should endeavour for unity and comprehensive development, he urged.

On its part the dean of the African diplomatic corps underscored that Morocco has always been standing by Africa, expressing the hope that the Kingdom will return to the African family fold.