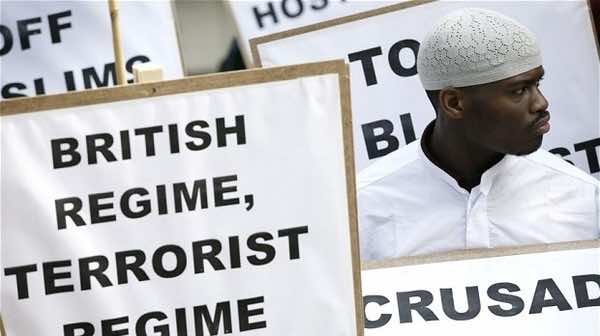 An alleged friend of Michael Adebolajo, a suspect in the murder of a soldier in London, has been arrested at the BBC after telling the broadcaster that British security services had tried to recruit his friend.

Abu Nusaybah told BBC television on Friday that Adebolajo was asked by the MI5 domestic intelligence agency if he wanted to work for them.

He said Adebolajo had snubbed their approach.

The BBC said Abu Nusaybah was promptly arrested on their premises after giving the interview.

Scotland Yard police headquarters said Saturday that counter-terror officers had arrested a 31-year-old man in London on suspicion of the “commission, preparation or instigation of acts of terrorism”.

It is understood the arrest was not directly linked to the brutal murder of soldier Lee Rigby, who was hacked to death in the street Wednesday outside the Royal Artillery Barracks in Woolwich, southeast London.

Adebolajo, 28, and Michael Adebowale, 22, who remain under armed guard in hospital after being shot by police at the scene, were known to the intelligence services but were reportedly assessed as not posing a deadly threat.

Abu Nusaybah said he first met Adebolajo in early 2002 and was struck by things his friend said to him roughly six months ago.

The murder suspect claimed he had been picked up by Kenyan forces and physically assaulted in detention there.

Adebolajo was “basically being harassed by MI5, this is something that he specifically mentioned to me.

“His wording was: ‘They are bugging me — they won’t leave me alone.’

“He mentioned initially they wanted to ask him whether he knew certain individuals.

“But after him saying that he didn’t know these individuals and so forth, what he said is they asked him whether he would be interested in working for them.

“He was explicit in that he refused to work for them but he did confirm that he didn’t know the individuals.”

The BBC said it could not obtain any confirmation from government ministry sources as to whether Adebolajo had been approached by MI5.

He was detained “on suspicion of the commission, preparation or instigation of acts of terrorism under the Terrorism Act 2000”, the statement said.

“The man has been taken to a south London police station, where he remains in custody.

“Search warrants are being executed at two residential addresses in east London.”