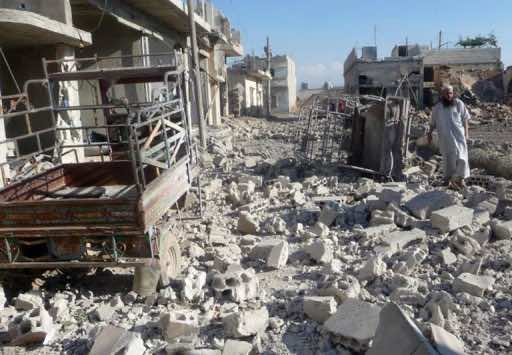 ntense clashes rocked the central Syrian town of Qusayr on Saturday, a watchdog reported, as regime forces backed by fighters from Lebanon’s Hezbollah pressed an assault they launched almost nearly a week ago.

Rami Abdul Rahman, head of the Syrian Observatory for Human Rights watchdog, told AFP that “the fighting and shelling, which took place on Saturday on the main roads inside and outside of Qusayr, are the most intense since the beginning of the offensive.”

“The town of Qusayr, and the rebel areas north of the town like Hamdiyeh, the former military airport at Dabaa and Arjuneh have been subjected to heavy bombardment by regime forces who are using surface-to-surface missiles,” he added.

Qusayr is a key prize for the rebels, a conduit through which weapons and fighters can be channelled from Lebanon.

It is also important for Bashar al-Assad’s forces because of its strategic location between Damascus and the Mediterranean coast, the Alawite heartland of the embattled president’s regime.

The Syrian army, backed by fighters from the Shiite Hezbollah, began their assault on Qusayr last Sunday.

Rahman said “the intensification of the fighting can be explained by Hezbollah’s desire to score points before the speech their leader Hassan Nasrallah is due to deliver this evening,” marking the 13th anniversary of Israel’s withdrawal from Lebanon.

Anti-regime demonstrators across Syria on Friday denounced the Hezbollah chief, waving placards reading “Nasrallah, impostor of the resistance,” and “Homs is not Jerusalem,” a reference to the group’s slogan about liberating Jerusalem